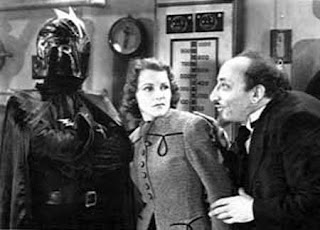 It's rather amazing that FIGHTING DEVIL DOGS is as well-liked as it is. Though the serial's directors, William Witney and John English, would soon become pre-eminent in their field, DEVIL DOGS owes a considerable debt to Republic's 1937 serial DICK TRACY. The debt goes beyond simply the later serial recycling footage from TRACY, particularly one of the villain's weapons, "the Flying Wing." Further, as the above still shows, the principal villain, a masked figure, is aided by a hunchbacked scientist, just like the villain in TRACY. Only one of DEVIL DOGS's scripters worked on DICK TRACY, so it's more than a little possible that some producer at Republic gave the order to recycle plot-elements used in the apparently successful TRACY. Even the sympathetic element of TRACY-- his brother is killed by the villain's havoc-- is virtually duplicated by early in this one, where one of the two Marine heroes loses his father to the contrivances of "The Lightning."

Whether or not the visage of the villain inspired Darth Vader or not, the Lightning's costume is indubitably an improvement over the image presented by TRACY's featured fiend, whose men couldn't seem to make up their minds whether to call him "the Spider" or "the Lame One." The Lightning's regal armor seems to belong to a futuristic era, and this dovetails nicely with his ability to unleash super-scientific menaces designed to humble the mundane world: electric rays, flying torpedos, and so forth. The mystery of the villain's true identity is no better or worse than a dozen others, but even before he's unveiled, the Lightning seems to have gravitas, as if he embodied the advances in human technology that would spread all over the world within the space of one year, when another world war would burst forth. Even his hunchback (John Picorri) has more class than the guy serving the Lame One.

The two military heroes (Lee Powell, Herman Brix) are barely distinguishable aside from one of them having his father killed, but they (and their doubles) display credible dynamism in the fight-scenes. And though most fans have been impressed by the similarity of the costumes of Darth Vader and the Lightning, I was a little more intrigued to learn that (remember, SPOILERS) that the villain was actually the father of the serial's heroine. Granted, she's never as torn-up about this revelation as Luke Skywalker is-- the script even gives her an "out" by revealing that he's an adoptive father-- but I have no problem believing that George Lucas reached into his "old serial" collection when he was writing EMPIRE STRIKES BACK.
Posted by Gene Phillips at 3:38 PM
Email ThisBlogThis!Share to TwitterShare to FacebookShare to Pinterest
Labels: combative adventures, the marvelous