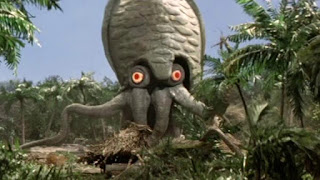 
Sentiment causes me to use the Americanized title for my review of this 1970 Japanese kaiju, originally called "Space Amoeba." Since no entity in the film is ever actually called "Yog"-- the name perhaps being a creation of some publicist-- the Japanese title is more accurate. However, since I still remember seeing "Yog" on a double-bill with "Godzilla vs. the Smog Monster," I choose the more colorful title.

YOG is, however, one of the weakest kaiju films of the period. A space probe returns to an isolated island on Earth with an unwelcome guest: an invisible amoeba-organism that can mutate ordinary beasts into huge monsters, which the amoeba presumably plans to use in some plan for conquest. One can only speculate, for the only time the amoeba "speaks" is when it takes control of a human being-- and even then, the viewer never learns what the creature's ultimate goal is.

In contrast to the primary template of giant-monster movies, no elaborate models of cities are destroyed here: all of "Yog's" creations are confined to the island. There happen to be a smattering of humans confined to the island-- a photographer and some companions-- and they find themselves forced to stop the alien invasion at its origin point. All three of the amoeba's monsters are given names in the screenplay, though there really seems no particular reason for anyone on the island to name them, particularly since the monsters are vanquished rather easily despite their impressive size.

This is a rare giant-monster film in which even the counter-measures of the humans fail to sustain the combative mode. A monster displays the power to project waves of cold; the humans invent a way to heat it up and kill it. Two monsters are conveniently confused into fighting one another by "supersonic waves," but there's little logic about how the humans manage to figure out this vulnerability. In addition, all of the Earthlings are singularly boring, even for this type of film, and the only thing I enjoyed about the film was the image of one monster, a giant octopus, walking upright on his tentacles.

It's hard to believe that Ishiro Hondu, responsible for so many strong fantasy-films, churned out an effort this listless.
Posted by Gene Phillips at 3:36 PM
Email ThisBlogThis!Share to TwitterShare to FacebookShare to Pinterest
Labels: the marvelous