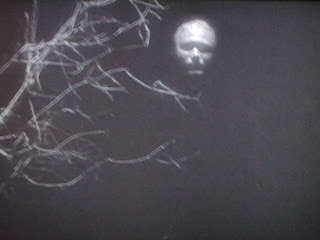 PHANTOM OF CRESTWOOD is a modestly engaging "old dark house" film from Hollywood's pre-Code era. The initiating plot was long in the tooth even in 1932: a "scarlet woman" with many affairs to her name (a saucy Karen Morley) forces a number of her past lovers to assemble at her mansion, so that she can blackmail them all at once. Rather than simple greed, her motive is somewhat informed by guilt: she wants more money to leave the country because a young man killed himself over her. However, while bringing all of her blackmail-victims together may have seemed expeditious, it also encourages one of them to kill her. Or is it one of the blackmail-victims? A strange "phantom" also haunts the courtesan before she dies-- a phantom who resembles the young suicide.

There are some familiar tropes here, such as a convenient rainstorm washes out the roads, so that all the suspects are neatly contained in the mansion, along with a detective (former big name Ricardo Cortez) and a group of crooks fleeing the law. The dialogue is more lively than most later dark-house mysteries, and the "phantom of Crestwood" is given a much more psychologically interesting explanation than the majority of such phantasmal figurations.

Posted by Gene Phillips at 3:36 PM
Email ThisBlogThis!Share to TwitterShare to FacebookShare to Pinterest
Labels: phantasmal figurations (u), the uncanny