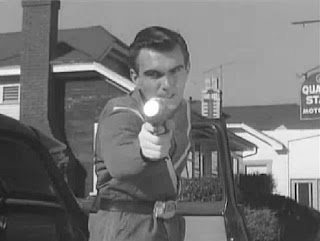 
TEENAGERS, the only film completed by eccentric writer-director Tom Graeff, sports bad acting, impoverished special FX and a thoroughly predictable narrative. Yet, as with some of the better Ed Wood works, it's hard to hate a film that so openly wears its heart on its sleeve.

Four teenaged aliens and a middle-aged commander land their flying saucer on Earth. Curiously, when the saucer is first seen by both an astronomer and the film's viewing audience, it looks more like a whirling drill, but since this is never important in the story, it probably just means that Graeff decided to try an effect for the ship beyond Ed Wood's "pie-plate" solution. The aliens don't have any special name for themselves, though they think highly of their place in the cosmos, calling themselves "the supreme race." They've come to Earth after having failed to find any more suitable planets on which to keep their herd-beasts, known as "Gargons."

When one of the aliens exits the saucer, he's annoyed by the barking of a pet dog from a nearby Earth-city. He promptly shoots the animal with his ray-gun, turning it into a fleshless skeleton.Possibly this is the reason that the aliens take the trouble to refer to their weapons as "focusing disintegrators," because the guns leave behind some skeletal remains. The mean alien-- whose name is that of the Norse thunder-god-- receives no censure from the other members of the ship, except one sincere fellow, with the equally un-alien name of Derek. Derek is also the only one who protests that they shouldn't consider leaving their herd-beasts on this planet, for the Gargons could cause harm to the natives. The other aliens act like Derek is crazy for even considering the well-being of inferior beings, given that their superior race has had emotions like empathy bred out of them. Later it's revealed that the race's children are not raised by their parents, but by parents selected by the government. Derek rashly reveals that he belongs to an underground movement that believes in humane ideals, and his superiors-- particularly the sneering Thor-- threaten him to take him back to their world for punishment. They're distracted by the findings that their sample Gargon-- in truth, a regular-sized lobster-- seems to be dying in the Earth's atmosphere. Derek escapes his fellow aliens. Almost immediately, the aliens discover that the Gargon has recovered and seems to be viable on this new world after all. The aliens set about the business of getting the Gargon situated, presumably as a prelude to bringing down a never-seen herd. They send Thor to track down Derek and execute him.

After this complicated info-dump, the rest of TEENAGERS is mostly a chase-story. Derek, who has for some reason picked up the license-tag of the dead dog, finds his way to the dog's owners and ends up taking a room with them. He forms a bond with Betty a cute young Earth-teenager, who takes him swimming. Thor makes his way to the Earth-city as well, and manages to learn how to drive before killing his teacher. Derek and Betty make other stops while Derek agonizes over revealing the truth to the young woman, and wherever they go, Thor follows, killing more Earth-people. Finally, there's a shootout between Thor and local cops. Meanwhile, the tiny Gargon has grown giant-size-- an effect achieved by simply showing the projected shadow of the lobster-- and the monster supposedly kills several people, though the film doesn't have the budget to show this. Derek reveals the truth to Betty, uses an electrical tower to destroy the Gargon, and then sacrifices himself to destroy his ship and a whole armada of other invaders. Oh, and it's revealed that the middle-aged commander is Derek's father, so his act of rebellion is also a patricide.

The majority of TEEANGERS is a naive glorification of the virtues of being a fully emotional human being, as against the programming of a state government. Comparisons with the then-contemporary menace of Communism seem inescapable, and indeed, the film's only moderately strong dramatic scenes are those of Derek excoriating the soullessness of his people, who have virtually made themselves into machines. There's some quasi-Wellsian potential in the idea of aliens who are so disinterested in empathy that they see Earth not as a realm to conquer, but simply a pastureland where they can keep their food-animals, but of course the budget makes it impossible for the film to give this idea any credibility.

In contrast to many "alien invasion" films made in this time-period, the character of Derek is more significant than his race as a whole, making him the "focal presence" of the story.
Posted by Gene Phillips at 3:12 PM
Email ThisBlogThis!Share to TwitterShare to FacebookShare to Pinterest
Labels: the marvelous