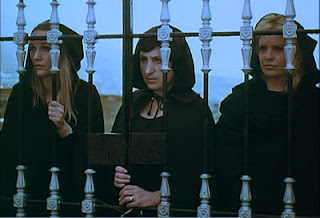 
I like to think that I have a fair appreciation for really brain-fried films, in which it's evident that a given filmmaker has totally lost control of his narrative. However, there's a world of difference from someone like Ed Wood, whose odd worldview is somewhat memorable, and that of Spanish writer/director Miguel Madrid, who's really just moving a lot of game-pieces around without much investment.

While it's possible that the English language version left some things out, Madrid's presentation of his characters and setup is desultory at best. A character named Michael is sort of the viewpoint character, in that the movie starts out with him doing a voice-over about Binbrook,his family's castle. The lord of the castle is Michael's brother Robert, a Scottish earl, who lives there with his wife Ann, a family doctor named Lexter, and Margaret, whom Michael calls his niece though it's never clear if she's Robert's daughter or some other relation. Robert has been missing about a month or so, but Michael shows absolutely no interest in this fact. Upon returning to Binbrook, he learns that his wife Elizabeth has died, ostensibly in childbirth, though both Lexter and another local doctor are vague on details. Elizabeth's mother blames Michael for being absent, and Elizabeth's two sisters Lilith and Pamela seem hostile to Michael as well. Margaret welcomes Michael somewhat, but Ann-- who's introduced so poorly that I thought she was supposed to be related to Elizabeth's family-- has a medical condition, which is why the enigmatic Lexter is a live-in doctor.

Michael is so aggrieved by all the secrets that he tries to get help from a creepy caretaker, one Fowles, in opening the grave of Elizabeth. Fowles gives Michael no help, and when Michael tries to do the deed himself, two robed figures in demon-masks assault the young man and knock him out. They drag him off, and the last we see of Michael for a while is when the robed men put him in the path of some unseen creature.

GRAVEYARD then becomes a peculiar film, in that two major characters have disappeared and no single character takes Michael's place as viewpoint-figure, not even the local cop who takes charge of investigating the disappearances. Creepy Fowles hangs around, and it's evident to the viewer that he's colluding with the robed men, though their identities remain hidden. Director Madrid then puts most of his narrative drive into explicating how Lilith and Pamela were both hot for their missing brother-in-law Michael, so in a way Michael, even while absent, is still very near the center of the action.

(MAJOR SPOILER: though Madrid doesn't tell viewers how Michael escaped his assailant, the film concludes with the revelation that he went into hiding for some reason, so he's still alive at the confusing conclusion.)

However, Michael is sort of a stand-in for the real star of the narrative: that other missing brother, Sir Robert. We belatedly learn that he was an experimental scientist, and that he ran one of his experiments on himself, thus changing himself into a (very cheap looking) monster. Thus he's been confined by Lexter, who feeds him from the local graveyards. There's no suggestion as to why both Lexter and Robert's wife thought that keeping and feeding a dangerous monster was a good idea. Maybe they'd read JANE EYRE once too often? It all unwinds with Robert killing his keeper and being gunned down by cops.

Though there's little nudity or gore in GRAVEYARD, the film's only real appeal is the sense of lustfulness communicated by the two sisters, since these scenes build up the fantasy of Michael as an irresistible chick-magnet. I tend to think the film would've been a little more unified had one of them actually killed Elizabeth, rather than being mere red herrings to distract from the weak Robert-plotline.

Posted by Gene Phillips at 4:10 PM
Email ThisBlogThis!Share to TwitterShare to FacebookShare to Pinterest
Labels: the marvelous