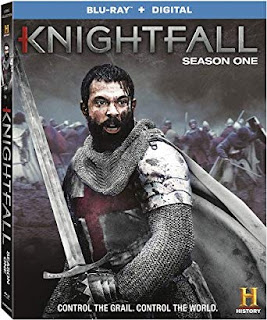 
I'm almost always able to make a phenomenological judgment of anything I review, be it a stand-alone work, an episode of a series or the entire season of a series. But for the first time I'm putting question-marks after my phenomenality determination above, because Season One of KNIGHTFALL just doesn't give me enough information. More on that later.

Set in France during the 1300s, KNIGHTFALL rewrites many of the cultural myths about the historical Knights Templar. Instead of portraying them as elitist villains, as they are in Walter Scott's IVANHOE (which I touch on here), the Templars are faithful defenders of France, even though their primary loyalties are to their own order, and to Pope Boniface. Though the series' first season portrays a wealth of characters, the star of the show is Landry de Lauzon, who succeeds his deceased mentor as the titular head of the Templar monastery in Paris. In the course of the series, Landry comes into conflict with the King of France, with his scheming, Richelieu-like lawyer De Nogaret, with other members of his order, and with a mysterious Saracen order, the Brotherhood of Light. The Brotherhood is one of the more fantastic aspects of this not-very-historical period-piece, for their purpose is to block Landry from one of his main missions: to re-acquire the Holy Grail, of which the Christians lost custody during one of the unsuccessful battles of the Crusades.

The "weird society" of the Brotherhood, by itself, would qualify only as an uncanny trope, as would some of the more exotic weapons that appear in 12th-century France, such as the concoction called "Greek fire," and a costumed female assassin, referred to as a "Mongol" but geared up to look more like a 12th-century version of a ninja. Plainly the makers of the series chose to base their reading of history on extravaganzas like Frank Miller's 300, or at least the film version thereof.  Once a viewer understands that this is not primarily a naturalistic series, its departures from consensual reality can be tolerated.

To be sure, though KNIGHTFALL boasts quality acting and bracing battle-scenes, there are so many divergent subplots in the show's ten episodes that the season comes off somewhat disjointed. Another plus is that the series does not, like many current movies about the era of the Crusades, attempt to downgrade the Christian outlook of the principals, even though Landry comes to realize that conquering the Holy Land is a fruitless endeavor. Some scholars have asserted that the stories of the search for the Holy Grail became for medieval Europeans a compensatory goal for the failure to regain the formerly Christianized lands of North Africa. Certainly Landry's search for the Cup of Christ, and its possible use to redeem mankind, becomes his primary goal as a Templar, even though he has a number of other human concerns as well (not least a major romance with the Queen of France, a big no-no for a Templar monk).

However, the series keeps the nature of the Grail mysterious. One character claims that drinking from the Grail cured him from a fatal wound, and he even shows Landry the catastrophic nature of the wound as proof. But only in one later incident does Landry try to use the Grail to heal someone, and the result is ambiguous. Further, a character aligned with the Brotherhood of Light suggests that the cup may be far older than the era of Jesus Christ, so at the very least, the show's creators wanted to leave open the possibility that the Grail could have some special properties.

Possibly the recently issued second season will bring forth more evidence one way or the other. Online sites seem skeptical as to whether KNIGHTFALL will enjoy a "third crusade."

Posted by Gene Phillips at 3:27 PM
Email ThisBlogThis!Share to TwitterShare to FacebookShare to Pinterest
Labels: combative adventures, diabolical devices (u), outre outfits (u), the uncanny, weird families and societies (u)