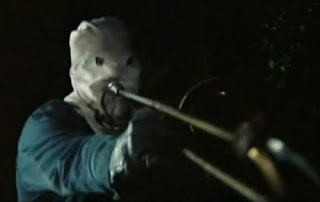 
Though TOWN takes some dramatic license, it's unlike most of the "perilous psycho" films I've covered in that its events are substantially based in the real events of the Texarkhana Moonlight Murders in 1946. Thus, of all the films I've reviewed here, TOWN's nearest relation is 2000's ED GEIN.

In that review I set down some of the reasons that I chose to classify GEIN as naturalistic:

I've long argued on this blog that the determining factor for metaphenomenal films-- including both the uncanny and the marvelous-- is not what divided them but what unites them: the sense of "strangeness."  If this were not the case, then we would have to judge Bloch's book to be horror because in the novel Norman tries to use occult books to resurrect his mother, while Hitchcock's film is not horror, because the script dispensed with this detail.  The uniting factor in both, whether the supernatural is invoked or not, is the "strangeness" communicated by the figure of Norman Bates, my favorite example for the trope of the "perilous psycho."


And later, with regard to how the film handles its potential for "strangeness:"

Nor does the quality of strangeness descend from any of the other factors that make up Gein's legend-- the gory murders, his fetish for shrunken heads (see the still above), his rearrangements of corpse-parts-- including a 'woman-suit"--or Gein's hallucinations of his dead mother talking to him.   These are all *potentially* elements for evoking the feeling of strangeness.  But ED GEIN pursues the approach I called "fictionalized-reality" above, meaning that Gein is rendered with a pathetic, no-larger-than-life treatment by lead actor (and executive producer) Steve Railsback.  Thus I judge that this version of Gein, unlike Norman Bates and other fictional icons spawned by Gein, to be purely "naturalistic."'

Now, although the slightly-fictionalized of 1946 Texarkhana is a naturalistic one, the killer who makes the town "dread sundown,"  dubbed the Phantom Killer, is uncanny in the extreme. Despite director Charles B. Pierce's use of a flat, documentarian style for most of the film, the scenes in which the Phantom preys on isolated victims clearly evoke the uncanny. The Phantom is always seen in a burlap mask and otherwise ordinary clothes. But in keeping with the details of the case-- wherein no perpetrator was ever charged-- his motivations and modus operandi are always left in mystery. He never speaks, and though he uses a more mundane weapon than most psycho-killers, an ordinary pistol, the Phantom nevertheless becomes a veritable boogeyman to the embattled Texas town. One scene, in which he torments a bound victim with a bizarre trombone-serenade, speaks to the utter unknowability of this particular psycho.

Happily, Pierce doesn't allow familiar faces like Ben Johnson, Andrew Prine and Dawn Wells to overpower the overall naturalness of the milieu, as one sees in most TV "movies of the week" about similar subjects. Even a climactic chase-scene, in which the law pursues the beleaguered killer, does not break with the downbeat, documentarian feel of the production.


Posted by Gene Phillips at 3:35 PM
Email ThisBlogThis!Share to TwitterShare to FacebookShare to Pinterest
Labels: outre outfits (u), perilous psychos (u), the uncanny