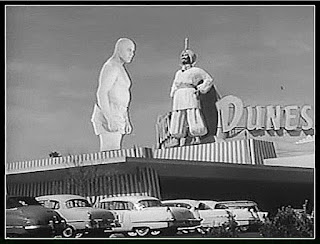 
Though I like AMAZING COLOSSAL MAN well enough, I confess I mainly re-watched it in order to verify the statement made in my review of ATTACK OF THE 50-FOOT WOMAN:


Nor surprisingly, I find that my memories of COLOSSAL were entirely accurate. There's no attempt to imbue the afflicted Glenn Manning or his long-suffering fiancee Carol with psychological heft, even to the limited extent seen in THE INCREDIBLE SHRINKING MAN. Indeed, in one of COLOSSAL's scenes, Carol tells a soldier that Manning has no relatives, which was almost certainly the script's way of keeping the cast of characters to a minimum. But even the romantic relationship between Manning and Carol remains static. She isn't seen in the film until long after Manning has been irradiated, and she never signifies anything but the supportive girlfriend, being even sketchier than the heroine of director Bert Gordon's immediately previous "giant film," THE CYCLOPS. There's one flashback showing Manning and Carol vacationing together before he's about to go off to fight in Korea, but even this exists just to foreground Manning's status as a soldier. Following the scene with Carol, the narrative cuts to a scene with Manning and a soldier-buddy being attacked by two Koreans, an encounter that only Manning survives.

To be sure, Manning makes his biggest impression at the film's opening, at a point when the viewer knows almost nothing about Manning. He and other soldiers are observers at the testing of a new A-bomb, but not only does the bomb not detonate as scheduled, a civilian craft accidentally lands near the bomb-site. Manning disobeys his commander's orders and rushes out to rescue the pilot. The bomb goes off, apparently annihilating the pilot and irradiating Manning. Days later, the doctors expect him to perish of third-degree burns-- nothing is said of radiation poisoning-- but he undergoes a rapid healing process, as Carol happily witnesses.

However, the military moves Manning without telling his fiancee. Carol does show some wit in the way she tracks him down to a private hospital, at which point she learns that her fiancee is already a giant, and growing more every day. At this point the military takes Carol into their confidence, and allows her to confer with the Colossal Man. Unfortunately, Manning has become unhinged by his experience, to the extent that he tells one frightened soldier, "I'm not growing! YOU'RE shrinking!"

Like a number of 1950s SF-films before it, a great deal of time is devoted to science-lectures, as various experts seek to both stop and reverse Manning's rampant growth. Patently scripters Mark Hanna and director Gordon were content to toss any sort of SF-hyperbole to justify the events, as when one scientist tells Carol that the Colossal Man's heart isn't growing as fast as the rest of him because "the heart is a single cell." This absurdity is almost trumped by a later development where another scientist manages to actually shrink two huge beasts, an elephant and a camel, with the serum he hopes to use on Manning.

But this is merely a false hope, for the Colossal Man, having figuratively become "too big for his britches," goes on a rampage and is ultimately destroyed by the army he served. Interestingly, he takes a tank-shot in the face, mirroring the way soldier-Manning shoots an enemy Korean in the face.

Though the scientific double-talk is worthless, COLOSSAL is never less than memorable in its exploitation of giant-izing visuals: Manning being kept in a circus tent, Manning wandering into Las Vegas and peeping on a bathing woman, Manning getting stabbed by a large-economy-size syringe by the doctors, after which the giant uses the syringe like a spear against a fellow soldier. So on the purely kinetic level, COLOSSAL is a colossal success.

I should note what many others have observed: that the rough outline of COLOSSAL was almost certainly borrowed for Marvel's INCREDIBLE HULK. But since the Hulk was designed to be a continuing character, the creators arguably upped the psychological game by having Bruce Banner rescue, not an anonymous pilot, but a wisecracking teen who then becomes intensely involved in the main character's travails.
Posted by Gene Phillips at 4:19 PM
Email ThisBlogThis!Share to TwitterShare to FacebookShare to Pinterest
Labels: the marvelous