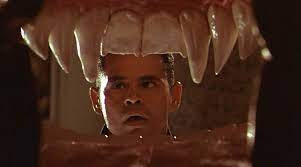 The original FROM DUSK TILL DAWN was a fast-paced, balls-to-the-wall horror-fantasy easily summed up in one quick pitch: a motley crew of bikers, criminals and innocents fall afoul of a clutch of vampires who operate a Mexican titty-bar. I’ve not yet finished watching the teleseries spinoff, and so can’t judge how successful that show was in duplicating the movie’s pulp aesthetic. However, I didn’t really expect either of the direct-to-video follow-ups to come up to snuff. As it happens, I was only half right.

The sequel, subtitled TEXAS BLOOD MONEY, takes place in the same general area as the first film and occurs two weeks later. Though a small handful of characters from the first movie make appearances, in essence this is a sequel in name only. MONEY is first and foremost a heist film, in which career criminals Buck (Robert Patrick) and Luther (Duane Whitaker) plan to rob the safe of a Mexican motel with some accomplices. Things go south when Luther accidentally runs over a vampire bat with his car in the Mexican desert, not even knowing that he’s slain a real vampire. Luther’s car stalls out, and he walks to the familiar enclave of the vampires, the Titty Twister—and once the vampires learn that he’s killed one of their own kind, the bloodsuckers make it their business to track down all the heist artists, either to kill or to vampirize them.

Neither the crooks nor the vampires have interesting motivations, and though there’s a lot of chaotic violence in the film—particularly when the local cops try to stop the vampirized robbers—none of it proves memorable. The whole thing seems to be nothing but an indulgence in pointless ultraviolence, which seems appropriate since its director was Scott Spiegel, co-writer of Sam Raimi’s EVIL DEAD II. MONEY even starts off with a throwaway vamp-murder scene featuring Raimi favorite Bruce Campbell, getting killed in an elevator by some vamp-bats along with TV-star Tiffani Thiessen. Spiegel later went on to helm one outstanding work, SPIDER MAN 2, though this proved uncharacteristic of his directorial work as a whole. 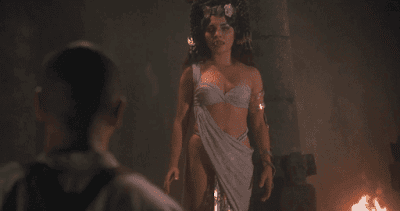 In marked contrast, HANGMAN’S DAUGHTER—a prequel to the original film, directed by P.J. Pesce—is almost as kinetically extravagant as the first movie. Scripter Alvaro Rodriguez—cousin of the first film’s director Roberto, who may have collaborated on the basic story of DAUGHTER—set the action in the Mexico of 1914, It was in this year that the celebrated author Ambrose Bierce disappeared during a trek to meet with Pancho Villa during the latter’s war with the Mexican government. DAUGHTER hypothesizes that Bierce and various other characters get mixed up with the vampiric residents of the Titty Twister. These allies of convenience include Johnny Madrid, a bandit who almost gets hanged, the local hangman Mauricio, and Mauricio’s daughter Esmerelda, whom Madrid kidnaps as a hostage.

In contrast to TEXAS BLOOD MONEY, where vampires and humans collide largely by accident, hangman Mauricio has a connection with the world of the undead. Although his daughter Esmerelda believes her mother Quixtla to be long dead, Mauricio knows that his former wife left him to join the undead, and though the hangman isn’t seen sexually abusing his daughter, an early scene, in which he whips Esmerelda for sympathizing with Madrid, suggests some transference of his hostilities toward his undead wife. Once events conspire to place these four characters, as well as a couple of side-victims, in the clutches of Quixtla, she engineers a ceremony designed to make Esmerelda into the new vampire queen, who will be seen under the name “Santanico Pandemonium” in the original DUSK. It’s not very clear as to what will happen to Quixtla once she lets her offspring take her place, but the matter becomes irrelevant once the humans find themselves battling tooth-and-nail against a species of vampires able to morph into all sorts of bizarre shapes, not just wolves and bats.

Pesce and the Rodriguezes conjure up a persuasive image of a Mexico constantly besieged by all sorts of natural evils, so that the supernatural ones merely seem a logical extension of the nation’s woes. As with the original film, DAUGHTER’s main goal is to please audiences with heaps and heaps of insane violence, and while the prequel doesn’t quite equal its model on that score, there are some fine moments, such as a scene in which Madrid kicks a vampire in the balls, and then has to wipe off his boot afterward. Madrid and Bierce are the main stars of the fracas and though Marco Leonardi does a creditable job giving life to the ruthless but not utterly unsympathetic bandit, Michael Parks is the real standout here. The actor only played the supporting role of a sheriff in the first two films in the series, but Parks’s unceasingly acerbic portrait of “Ambrose Bierce, Vampire Slayer” strikes me as being the role of a lifetime. Sonia Braga and Ara Celi are also memorable as the vampire mom and the daughter who inherits her bloodstained throne. While MONEY’s flagrant but disorganized violence results in a merely subcombative work, DAUGHTER musters a far better scenario for its vampire-human contentions and so qualifies for the combative mode.

Posted by Gene Phillips at 11:58 AM
Email ThisBlogThis!Share to TwitterShare to FacebookShare to Pinterest
Labels: combative dramas, the marvelous