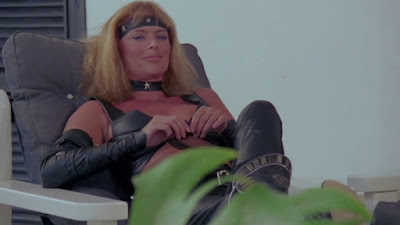 PANTHER SQUAD is one of those flicks that’s a little more interesting for its place in a given actor’s career than for anything one sees up on the screen. Until Sybil Danning synched with filmgoers in 1980’s BATTLE BEYOND THE STARS, the Austrian/American actress had bounced around European and American films for over ten years without making a lasting impression on audiences. BATTLE made Danning a big enough name that she enjoyed a handful of headliner roles during her eighties heyday, usually either sexy roles like THEY’RE PLAYING WITH FIRE or action-parts like the character of Ilona in this film, lensed the same year as FIRE.

To call SQUAD an action-film is something of a formal categorization, because in the hands of journeyman director Pierre Chevalier the flick is about as exciting as watching Chuck Norris register changes of expression. The script was clearly designed to be as simplistic as possible: when a confederation of environmental extremists, “Clean Space,” threatens to sabotage the world’s space programs, a U.N.-like organization calls upon a band of female commandos, the Panther Squad, to take out the raffish radicals. The squad consists of leather-clad Ilona and six mostly nameless hot girls, and they jaunt around various European locales seeking to root out the bad guys. The script wastes no time enlarging upon the ideologies of Clean Space, of the governments under fire, or of the mercenary girls. Despite a script free of nuance, though, Chevalier can’t mount an action-scene to save his life, and the girls look like they learned their fighting-and-shooting stunts the day before filming those scenes. Danning, while not a genuine martial artist, had already showed herself to be competent in her handful of fight-scenes for 1983’s THE SEVEN MAGNIFICENT GLADIATORS. Yet even though she’s the main attraction—and, BTW, one who remains fully clothed throughout the story—her execution of battles is no better than anyone else’s, whether in unarmed or armed combat. Only one “fight-scene” is slightly amusing. Toward the end, even though neither Ilona nor her compatriots have been shown using anything but conventional firearms, the queen panther whips out a clunky ray-gun and disintegrates a bunch of Clean Spacers. I’ll hypothesize that some writer threw in this unexplained SF-gadget so that American video stories might class SQUAD as sci-fi and give it more exposure on rental shelves, where it might profit by getting attention from fans of BATTLE BEYOND THE STARS. But that hypothesis too is more entertaining than anything in the film.

There are a handful of familiar Euro-faces in the cast: Jack Taylor, Analia Ivars, and Karen Schubert, but they’re all just as boring as leather-clad Sybil. The only bit of acting that I liked was that of Spanish actor Antonio Mayans, though I didn’t know him from other films. Playing General Carlos, the leader of Clean Space, Mayans has one scene in which he rants uncontrollably at a bunch of his cohorts. I couldn’t understand a word he said, but he showed a lot of energy, and that was a lot more “panther-ish” than anyone else associated with this crapfest.

Posted by Gene Phillips at 4:20 PM
Email ThisBlogThis!Share to TwitterShare to FacebookShare to Pinterest
Labels: combative adventures, the marvelous