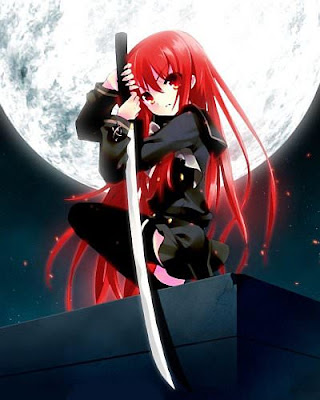 I have explored none of the manga adaptations of this franchise, much less the light novels that gave rise to the concept, but after having been slightly entertained by the first season of the anime series, I decided to survey the second season and to review both.

The predominant trope of SHAKUGAN NO SHANA might be described as “Badass Otherworldly Girl Bonds with Ordinary Earth Schmuck.” In most if not all manga/anime executions of the trope, the girl and the boy are either teenagers or in their early twenties, the better to exploit any and all romantic possibilities. Just as a guess, the popular eighties franchise TENCHI MUYO might have provided SHANA with its basic template, although SHANA is atypical in that the Earth Schmuck here doesn’t get a whole harem of cute girls fighting one another for his attentions. The schmuck in question, Yuji by name, does have one Earth-female who’s warm for his form and so competes with otherworld-girl Shana. However, there are only two other female support-cast types in the show’s first two seasons, and neither of them is interested in Yuji.

This relative lack of constant romance-plots left the door open for other types of dramatic development, but I’ve the impression that the original author of the franchise wasn’t especially ambitious in this regard. The scenario at least makes a little more sense than, say, DATE A LIVE, in that Shana comes from a dimension whose hostile inhabitants raid Earth to gather human energies (called “power of existence.”) Shana is one of a group of sword-wielding knights called “Flame Hazes” who make it their business to rein in the raiders, called “Denizens.” Apparently human beings, though not directly tied to the otherworld, have parallel functions, for when Shana first encounters Yuji, she reveals that she deems him a “Torch,” a human with an intrinsic ability to stoke her own powers, though possibly at the expense of Yuji’s own existence. This contrivance provides Shana, a female with no understanding of human culture, with a motive to remain in Yuji’s company, while Yuji then seeks to find some way around the implied death-sentence he’s been given. Naturally, there’s a way out, for Yuji not only staves off imminent death but gains a measure of power to fight Denizens himself, even if Shana remains the dominant fighter of the two.

The interactions of Shana and Yuji are moderately entertaining in the first season, but the writers seem satisfied to leave things in status quo for the second season, aside from a belated announcement that Yuji’s parents may have another kid, which I assume is a plot destined to be developed in the third and final season. The writers don’t develop any of the support-characters to make up for this lack, either. The only one who proves somewhat memorable is the winsomely named Flame Haze “Margery Daw.” In addition to her being older than Shana, Margery also proves cynical and bad tempered, a negative reflection on the life of being a knightly hero. This attitude does not keep Margery from making a vaguely defined compact with two of Yuji’s high school classmates, but the scripts are never clear about just what Margery gets out of the association, except that she doesn’t have a romantic linkage to them as Shana does with Yuji.

As for the main conflicts, some episodes offer some colorfully designed villains, but all the Denizens seem pretty much the same, without good character arcs to distinguish them. Shana herself is the most memorable looking character, and her voicework puts across a dynamic personality. However, everyone else in the show proves pedestrian, and episodes oscillate between bursts of fantasy-violence (featuring a preponderance of clockwork imagery for some reason) and lots of tedious talking-head scenes.

In short, I doubt I’ll ever invest any time in Season 3 of this low-interest endeavor.

Posted by Gene Phillips at 4:11 PM
Email ThisBlogThis!Share to TwitterShare to FacebookShare to Pinterest
Labels: combative adventures, the marvelous