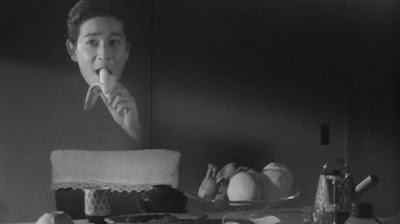 This interesting little potboiler, directed by Mitsuo Murayama, manages to balance its main appeal, that of a murder mystery with the appeal of not one but two “movie monsters,” one good and one evil. There were apparently a couple of Japanese “invisible man” movies prior to this one, but they seem to have followed the example of the H.G. Wells novel in making the unseen fellow a menace to society. FLY may be the first heroic version of the Invisible Man in feature films since Jon Hall’s INVISIBLE AGENT—and even the Agent was potentially capable of turning monstrous. FLY even predates the better-known British “Invisible Man” series that aired from 1958 to 1959.

A series of inexplicable murders baffle the police, particularly Inspector Wakabayashi. The inspector’s investigations eventually lead him to suspect that the killer is using some special scientific method to commit the murders, and this leads him to consult with Doctor Tsukioka, a specialist in cosmic ray research. Fortuitously the doctor reveals that one of his former collaborators, name of Kusunoki, went to prison for selling secrets, and that his super-science may be involved in the murders. Even the doctor doesn’t suspect the truth: that Kusunoki has created a special gas that turns a henchman into a “human fly,” a miniaturized human who for some unknown reason can flit around like a fly, enabling him to stab victims without anyone see him do the deed.

Even before the doctor supplies this information, though, he reveals that through his research he has created an “imperceptibility device,” with which he can render a man invisible. The process poses some danger for the subject of the experiment, but Wakabayashi volunteers to become an invisible avenger.

Though there are some appealing effects for both the Invisible Man and the Human Fly, the title is a bit of a fib, since the effects-budget wasn’t capable of depicting any sort of literal battle between two such fantasy-figures. The climactic conflict of cop and criminal is executed not with super-powers but with mundane firearms, except for one scene, in which an unexpected volunteer undergoes the invisibility process in order to thwart Kusunoki. Though no wheels are invented here, at least Murayama’s visuals have an appealing simplicity, even if the plot meanders somewhat and suffers from a few too many disposable characters.

Posted by Gene Phillips at 12:06 PM
Email ThisBlogThis!Share to TwitterShare to FacebookShare to Pinterest
Labels: combative dramas, the marvelous