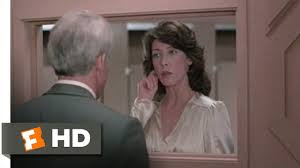 This Steve Martin-Lily Tomlin comedy can best be summed up thusly:

Uptight boy meets doomed rich girl and they can’t stand each other.

Bungled reincarnation plot causes girl to have her spirit lodged in boy’s body.

Boy and girl learn more about each other, fall in love and manage to unite in the end.

ALL OF ME, directed by Carl Reiner, is one of those films that’s very funny the first time one sees it, but proves to be less involving on subsequent viewings. The script emulates the form of the classic screwball comedies of the 1930s, particularly those that emphasize conflict between American monetary classes, but there’s so much concern for formulating the next joke-filled set-up that the story always feels a little too by-the-numbers.

Roger Cobb (Martin), a young lawyer who’d rather play jazz for a living, is assigned to carry out the last will of heiress Edwina Cutwater (Tomlin), who’s never have a well day in her life and expects to pass on soon. Roger is aghast to learn that his new client has the hare-brained idea of using Tibetan magic to transfer her spirit into the body of Terry (Victoria Tennant), the hot young daughter of her stableman. Further, Edwina wants her riches transferred to Terry when the former’s body dies, since Edwina will finally have a body wherewith to enjoy her riches, while Terry’s spirit goes to the great beyond. Roger argues with Edwina and leaves, but later on, he’s in the firing line during the performance of the Tibetan ritual, and the heiress’s spirit becomes ensconced in Roger’s body. Much hilarity ensues, particularly when the two body-tenants learn that Edwina can control the left side of Roger’s body. Both occupants of Roger’s body want a ritual re-do, so that Edwina can go where she meant to go. But maybe Terry doesn’t want to cooperate now.

Steve Martin’s comic bodily contortions are the biggest draw here. In contrast, Lily Tomlin is usually off-camera, save when her spirit appears in mirrors. Thus Tomlin isn’t able to shine using only her voice, though she does have one excellent moment when Edwina tearfully reminisces about how she had to stay in a sick-bed while Terry and her young friends enjoyed the use of Edwina’s possessions. A Marxist filmmaker might have sympathized more with the low-class employee over the high-class heiress, but I don’t imagine that notion would have appealed to Carl Reiner had it occurred to him.

ALL OF ME is far from being a screwball comedy fit to stand with the greatest in the genre. Still, when one looks at the current state of comedy in feature films, even a modest success looks like a classic by comparison.

Posted by Gene Phillips at 1:33 PM
Email ThisBlogThis!Share to TwitterShare to FacebookShare to Pinterest
Labels: the marvelous