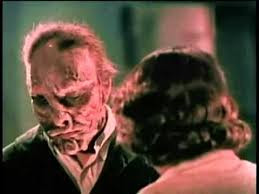 Though many critics have abhorred the Hollywood system of moviemaking, there should be no question that the business displayed an unprecedented penchant for exploiting story-ideas that might never have seen the light of day otherwise. The most famous of these would certainly be CASABLANCA, a classic film made from a play that no one ever acted on stage. However, MYSTERY OF THE WAX MUSEUM is probably the second runner-up, having been based largely on a short story that wasn’t even published.

I would imagine that the focus of the story was the same as that of the movie: a mad sculptor who coats dead bodies in wax for his statues. The story commences twelve years previous to the main narrative, when sculptor Ivan Igor (Lionel Atwill) maintains a wax museum in 1921 London. Little of the sculptor’s background is disclosed; the viewer only knows that he adores his sculptures as if they were his offspring. But art and commerce don’t mix, and London audiences ignore Igor’s museum in favor of thrill-shows. Igor’s business-partner Worth intrudes on Igor, angry that his investment may be lost, and he insists that they burn down the museum for the insurance. The two men fight, and Worth abandons Igor in a blazing inferno. Igor survives but disappears, choosing for his own reasons not to blow the whistle on his nemesis. Twelve years later, he opens a new wax museum in New York City.

Whatever the content of the original tale, MYSTERY was almost certainly altered so as to appeal to one of the main communication-tropes of early sound cinema: the rapid-fire delivery of the actor’s lines, particularly when those actors were playing hard-bitten professionals like cops or reporters. The film’s viewpoint character is one such journalist,

Florence (Glenda Farrell), who regularly engages in machine-gun snappy patter with her editor Jim (Frank McHugh). He orders her to find a good story or be fired. Florence, following up on a story of a model’s suicide, learns that the model’s body was subsequently stolen from the police morgue. The cops finger the model’s former boyfriend George, but after interviewing the young (and rich) fellow, Florence doesn’t think he had anything to do with the crime.

Florence also has more than her fair share of dumb luck, for her roommate Charlotte (Fay Wray) has a boyfriend who works at a new wax museum in the city. As a result of this coincidence, Florence pays a visit to the museum—which is, once again, not proving successful in the cutthroat world of art museums—and meets Igor, now a crippled man in a wheelchair who can no longer sculpt his statues. Igor has a couple of oddball assistants, one being a drug addict named Darcy, but Florence is particularly fascinated with one of the statues, which bears a striking resemblance to the missing corpse of the model. Eventually, it’s revealed that though Igor doesn’t really need his wheelchair, the accident with the fire did wreck his ability to sculpt—hence, his decision to raid morgues for bodies to convert into wax statues.

Once or twice I’ve seen MYSTERY tagged as being “necrophilic.” In truth, Igor’s love for his corpse-statues is purely platonic; they are both his family and his artworks. His utter devotion to his craft, played with low-key intensity by Atwill, contrasts nicely with the anything-for-a-buck attitudes of Florence and Jim, though Charlotte and her boyfriend Ralph are a little less extreme in this regard. Various subplots function mostly to pad out the film’s running time, such as one that suggests that Florence may strike up a romance with rich-boy George. Less successful is a plotline about Worth, who is in the city as well, having made a career switch from museum-investor to dope peddler. It’s loosely suggested that Igor has Darcy keep tabs on Worth, for eventually Igor kills his old partner. However, it’s far from clear as to whether, during the intervening twelve years, Igor was seeking to locate Worth for the sake of vengeance. If so, did he decide to open his studio in New York specifically to come after Worth?

The contrast between Old World and New World is enough to give MYSTERY the status of a popular myth, though of a somewhat different type than its remake, the 1953 HOUSE OF WAX. As I remarked in my HOUSE review, scripter Crane Wilbur placed more emphasis on the contrast between the high-art aspirations of sculptor Jarrod and the baser desires of the hoi polloi audience—and to some extent, Jarrod surrenders to the masses as Igor never does, since Jarrod crafts his second museum to appeal to the macabre. The makeup for Igor, deformed by the fire, is far superior to that of Professor Jarrod, and overall Atwill’s performance is less hammy than that of Vincent Price in the 1953 film. In addition, I thought MYSTERY handled the inciting incident of the fire better than HOUSE, In the later film, the Worth-analogue is comically conspiratorial rather than angry. However, HOUSE's scripter was wise to get the corrupt partner's killing out of the way quickly, since his prolonged presence in MYSTERY proves a distraction. Igor’s final battle against the police—a rare instance of a horror-movie madman giving the cops trouble with (mostly) bare hands—is not quite as well staged as a similar battle between Jarrod and the constabulary. For that reason, I don’t judge MYSTERY to be a combative drama, as I do HOUSE OF WAX.

Posted by Gene Phillips at 3:30 PM
Email ThisBlogThis!Share to TwitterShare to FacebookShare to Pinterest
Labels: bizarre crimes (u), diabolical devices (u), perilous psychos (u), the uncanny