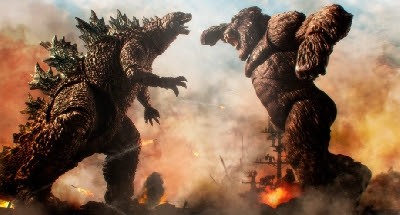 As I write this, GODZILLA VS. KONG—from now on, GVK—stands as the first post-Covid theatrical release to strike gold with assorted audiences. In contrast, WONDER WOMAN 84 came out earlier but has yet to break even, possibly in part due to appearing before the U.S. vaccine rollout. Nevertheless, the contrast does suggest that, despite the public’s ongoing thirst to see extravagant violence and high-budget FX, not all such kinetic pleasures are automatically equal.

In my review of GODZILLA KING OF THEMONSTERS, the previous film in this “Monsterverse” series, I wondered whether or not the forthcoming Kong-Godzilla matchup would be able to equal KING’s Brobdingnagian battles. I would now rate GVK at the top of the heap in terms of its execution of “giant monster fights,” leaving in the dust even the best of the “men in suits” efforts that gave rise to the Godzilla franchise. Yet it seems as though the producers were so focused on giving the public the ultimate Kong-Godzilla match—easily outstripping the original template of KING KONG VS. GODZILLA—that their film managed to ignore almost every other aspect of potential entertainment.

I could tick off at least a dozen major problems with the GVK script, ranging from simple lack of development (mostly in terms of its characters) to outright plot holes. The opening setup practically telegraphs at least one part of the conclusion. Five years have passed since Godzilla demonstrated his sovereignty over all the other giant monsters (conveniently offstage for this film), and humankind has more or less become accustomed to the idea that the “Titans,” as they’re called, are more like guardians of the planet than destructive behemoths. Then Godzilla inexplicably attacks a facility owned by Apex, a previously seen, morally dubious corporation. Did anyone in the theater doubt for a moment that Godzilla attacked Apex because its CEO Walter Simmons was up to something shady? But this possibility never occurs to the majority of the human inhabitants in the Monsterverse.

Two principal plotlines evolve from Godzilla’s attack. One is that Simmons approaches Nathan Lind, a whiz-kid scientist who knows a lot about the subterranean domain from which all of Earth’s colossal creatures arose, and convinces Lind to head an journey to the center of the Hollow Earth, to harvest some Godzilla-slaying super-power. But Lind needs a guide, and the only one who’s been there before, albeit decades ago, is the anthropoid resident of Skull Island. Further, Kong’s services can only be obtained with the help of Ilene Andrews, the woman who’s in charge of keeping Kong safe on the island, where the other “apex predator” Godzilla can’t sense him. Thus, Ilene, Lind and Ilene’s adopted daughter (the last survivor of the Skull Island tribe) are off to do Simmons’ bidding. Meanwhile, on the B-side, three forgettable characters, a conspiracy theorist and two high-schoolers, seek to get to the bottom of Apex (mixed metaphor notwithstanding).

I’m minimizing the characters and their significance to the overall plot because I feel the script—the product of five credited writers—treats all the human beings as bare functions of the plot. One must admit, of course, that deep characterization is not usually found in any giant monster films. Still, a lot of GVK’s problems could have been finessed, if not entirely fixed, with a little more attention to verisimilitude.

Yet, as if to echo Northrop Frye’s opposition between the literary properties of myth and verisimilitude, GVK fails at verisimilitude but excels in forging a new myth for both Kong and Godzilla. Such a myth is not founded in rationality. If it were, the myth would be undermined by the dissonance between (a) the vaguely New Age-y concept of giant monsters who are planetary guardians, and (2) the picture of them as brute animals ruled by the need to observe dominance rituals. Myth, however, can unify concepts that would ordinarily be distinct from one another.

In my review of KING KONG VS. GODZILLA, I noted that Kong’s original appearance was a romantic, “backward-looking” elegy to prehistoric life (or human ideas about it), while Godzilla heralded an apocalyptic future engendered by humankind’s tampering with the forces of nature. Nathan Lind’s discoveries in the Hollow Earth indicate an ancient enmity between the species of Godzilla and that of Kong, meaning that they are animals governed by a competitive nature. Yet it is that very nature makes them fit to oppose threats to the planet from outside (King Ghidorah) and inside (the Skullcrawlers). Between these two representatives of “nature red in tooth and claw” stands human culture. The “good humans” want to forge a separate peace between Kong and Godzilla, while a “bad human” like Simmons wants to get rid of Earth’s protectors so that he can be the new apex predator. Simmons never gets any lines that make him come alive as a character—he always seems like a road-company Tony Stark—but one can imagine him being in sympathy with Lt. Col. Packard of SKULL ISLAND, when the latter says he’s going to show Kong “that man is king.”

Of the two clashing Titans, Kong is closer to humanity, so he gets all the good character-moments. The viewer fears for his well-being when Lind’s expedition takes him into direct conflict with his ancient enemy, or when he braves the dangers of the Hollow Earth. Kong eventually finds a place in the underworld that may have once been the dwelling place of his lost people. And even though the idea of an intelligent Kong-people fails to track on any logical level, the film gets across a sense of tragic glory when Kong seats himself on a sort of giant throne and brandishes an ersatz “sceptre.”

If Kong is the furry “id” that eventually gives rise to the “superego” of homo sapiens, Godzilla embodies an even older substrate: the relentless reptile brain, focused only upon attacking everything in his path. The Godzilla of 1954 took his royal title from his cinematic predecessor, but he’s held the crown thanks to his indefatigable persistence, in marked contrast to most retellings of Kong, wherein the big monkey perishes at the hands of the cruel modern world. GVK does its best to upgrade Kong for his tourney with the Big G, giving the former king a size-upgrade and a weapon to offset Godzilla’s atomic fire—and Godzilla still comes out as the Biggest Badass on the Big Blue Marble. Even Simmons anticipates Godzilla’s superiority. He certainly doesn’t attempt to cook up a “MechaKong” for his mechanical minion! Yet, even though Simmons and Godzilla share a core ruthlessness, the will of the good humans brings about a rapprochement between the long-time enemies, as they’re forced to make a common cause against Mechagodzilla.

Putting across a new version of two superlative cinematic myths is no easy thing. Certainly, having good models doesn’t keep moviemakers from making really bad iterations of the originals, ranging from Peter Jackson’s 2005 abortion to the Big G’s partnership with Jet Jaguar. Of the four Monsterverse films in this series, all of them have some problems resulting from the producers’ use of various writers and directors as “hired guns,” resulting in a lot of narrative incoherence. Now that GVK has made good money, I would imagine that the production company will turn its thoughts to more collaboration with Godzilla’s Toho owners. I wouldn’t mind seeing GVK remain the last of the series, but if another installment does appear, I’ll watch it.

Posted by Gene Phillips at 2:07 PM
Email ThisBlogThis!Share to TwitterShare to FacebookShare to Pinterest
Labels: combative dramas, the marvelous