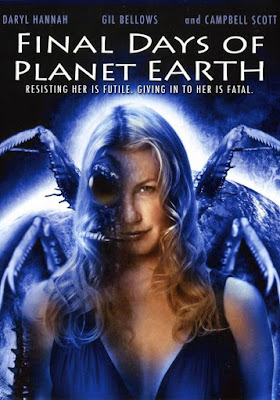 I didn’t see this two-part Hallmark miniseries in its original debut, so the only expectations I brought to my viewing was that I haven’t generally found most of Hallmark’s offerings all that noteworthy. Thus, I was surprised that Robert Lieberman’s direction of a Roger Soffer script provided me with a quite enjoyable ride, in addition with a relatively high level of mythicity.

After viewing the two-parter, I glanced at a handful of online reviews, and noticed that a fair number drew comparisons with the 1980s “V” serials produced by Kenneth Johnson. I suppose it’s not impossible that FINAL might have taken some inspiration from those serials, which enjoyed considerable popularity in their day (though the weekly teleseries inspired by the movies died in one season, as did a more recent incarnation). But if so, Lieberman and Soffer improved hugely on their model, since I found both the direction and writing of V to be terminally bland in all renditions.

V and FINAL both deal with inhuman aliens who assume humanoid appearances when they invade Earth with the intent of subjugating the natives. However, the V-aliens come “bearing gifts” in order to lull Earthlings into complacence, while the aliens of FINAL pursue the more standard course by simply infiltrating human government in order to conquer Earth. Both groups of extraterrestrials eat humans, but FINAL’s insect-aliens provide a touch more pseudo-scientific justification, claiming that these aliens need to assimilate keratin from their prey. (The miniseries never gives the bug-aliens even an informal nickname, but since one character claims that the invaders came from the Horsehead Nebula, I’ll call them for convenience the “nebula-bugs,” partly because the aforesaid character is inconsistent about which nebula the insects come from.) Lastly, since the V-aliens make their phony human disguises from scratch, the nebula-bugs take human corpses and skin them to make what the aliens call their “jackets.”

The aliens reach Earth by hitching a ride on a manned moon mission, and then assuming the guises of the astronauts. For reasons that are never clear, the nebula-bugs don’t kill the mission-commander Phillips, apparently because they’re repelled by his unique blood chemistry. But since Phillips goes mad from the takeover, the bugs simply allow the Earthlings to imprison the former astronaut as a madman. Only a handful of invaders make it to Earth, but one of them is a “queen-bug” who can lay hundreds of eggs, thus providing the foundation for an invasion force.

Fortunately, a handful of Earthlings become alert to the danger, beginning with a pair whose nature screams “opposites attract trope.” One is Walker, a misanthropic archaeologist who has little interest in his fellow humans, and the other Marianne, an entomologist who wishes that humans borrow some of the non-confrontational nature of bugs. Walker and Marianne make common cause with four other Earthlings whom the nebula-bugs have targeted for skinning, and then go on the run, unable to trust any agency, since the local cops have already been taken over by the aliens. Indeed, one of Walker’s perceived aliens, one Liz Quinlan (Daryl Hannah, the only “big name” in the dominantly Canadian cast), is none other than the Queen herself.

Unlike many latter-day alien-invasion scripts, Roger Soffer conveys a fair amount of biological info about the nature of the nebula-bugs, and even if most of that biology is based on Earth entomology, I still appreciate the attention to detail. The six unlikely heroes can barely scrape together even a meager arsenal to prevent the hatching of the alien armada, but Soffer gets a good deal of humor out of their situations, particularly after the group takes on a seventh member by liberating Commander Phillips from the nuthouse. At the same time, Soffer never sacrifices dramatic potential, as with the character of Bella, a refugee from violence in Europe, with her own perspective on conflict. There are a few cheesy moments in FINAL, mostly whenever the nebula-bugs burst huge mantis-like claws out of their “jackets,” though the bugs remain human in all other respects. (Budgetary restrictions, you know.) But the actors handle all the twists and turns with considerable aplomb, with special high marks going to Gil Bellows, Sue Matthew and Campbell Scott as respectively Walker, Marianne and Phillips.

I’ve deemed a lot of alien-invasion films to fit the Fryean mythos of “the drama.” But here, even though the protagonists aren’t overly dynamic, the emphasis seems to be on adventurous thrills—also one of the few fundamental things that FINAL has in common with V.

Posted by Gene Phillips at 3:13 PM
Email ThisBlogThis!Share to TwitterShare to FacebookShare to Pinterest
Labels: subcombative adventures, the marvelous