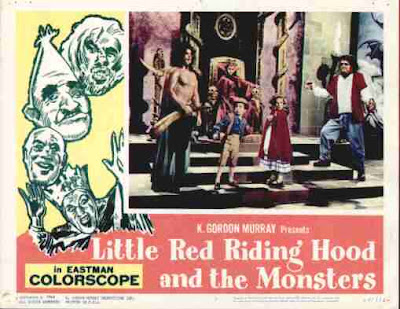 This Mexican kid’s film showed up in American theaters in the sixties thanks to Dub-meister Supreme K. Gordon Murray, sometimes given the title LITTLE RED RIDING HOOD VS. THE MONSTERS, which appears to be closer to the original Mexican name for the movie. The alternate title emphasizes the mashup of two fairy-tale icons that had earned separate Mexican outings, with Tom Thumb (under the name “Pulgarcito”) getting one film while Riding Hood (“Capurecita”) got two. Further, THUMB/ HOOD also brings in support-characters from the earlier movies, an ogre from the Pulgarcito movie and, perhaps more fittingly, a Big Bad Wolf from the Capurecita flicks.

At the start of THUMB / HOOD, these two former villains, the Ogre and the Wolf, are on trial in the Haunted Forest for having had the audacity to go against their villainous natures. A motley crew of monsters from both fairy tales and horror movies has assembled to pass judgment on the two former fiends, and that group includes a vampire, a Frankenstein Monster, a Siamese twin named “Two-in-One,” a boogieman, a guy with a carrot-head, a “Child Snatcher,” and a dwarf who can create hurricanes from his breath. Reigning over them all is the Queen of Badness, a dead ringer for the Queen from Disney’s SNOW WHITE, and though she condemns the recreants to be executed, none of the monsters seem to be in a great hurry to do so. That gives one comparatively benign monster, Stinky the dwarf-sized skunk, to seek the aid of the two icons, Pulgarcito and Capurecita. Possibly he just wants some moral support, since neither kid-hero can actually do much of anything. Pulgarcito is originally thumb-sized, though some magic turns him into a normal-sized boy (so that the producers don’t have to pay for special effects tricks), and Capurecita’s only ability is that when she sings, an adult woman’s voice comes out of her mouth! Nevertheless, Stinky finds the two kid-crusaders and makes his appeal on behalf of the Ogre and the Wolf (who spend a third of the film sitting in prison and kvetching at each other). The kids seek out the help of the adults in a neighboring village, but the Queen sends her sister, the Old Witch, to change all the adults into monkeys and mice. From then on, the boy and girl get chased around by various minions of the Queen until the climax, such as a clunky robot and the nasty Child Snatcher. (In one of the cleverer inversions aimed at a kid-audience, Pulgarcito, Capurecita and a bunch of local kids manage to tie up the Snatcher and turn him into a human pinata.) The Ogre and the Wolf finally break prison and join the munchkins for a while, though eventually all the good guys end up back in the castle of the Queen, where Capurecita serves the evil sorceress with a fate right out of “Hansel and Gretel.”

I should note that there are a few combative scenes in this kid-flick, such as a brief wrestle-fest between the Ogre and the Frankenstein Monster, or Stinky using his natural B.O. to kayo the Child Snatcher. But Pulgarcito and Capurecita are the stars of the show, making this a subcombative work. Still, despite ratty costumes and silly performances, THUMB / HOOD is never less than lively, and for that reason alone it makes a better fairytale mash-up than any episode of ONCE UPON A TIME.

Posted by Gene Phillips at 2:20 PM
Email ThisBlogThis!Share to TwitterShare to FacebookShare to Pinterest
Labels: the marvelous