I saw THE WORLD'S GREATEST ATHLETE  many years ago but barely remembered it. Then I recently came across a reference to the film in the context of its titular character "Nanu," mentioning that the protagonist was patterned along the lines of Tarzan. So I decided to check out the film and see how much if at all it conformed to the uncanny phenomenality of the Tarzan films I've analyzed here.

As it turns out, ATHLETE turns out to use the "outré outfits skills and devices" trope all right, but in a thoroughly naturalistic fashion.  There's nothing unnatural about the unfortunately named Nanu, though this comedy turns out to be marvelous overall, because Nanu's main opponent, if one can call him that, is an African witch doctor who commands real magic.

The story commences in America, where Coach Archer (John Amos) and his dimwit assistant Milo (Tim Conway) continually fail to win any games for Merrivale College either in baseball, football, or basketball.  Depressed by these constant failures, Archer takes a vacation to the African realm of Zambia, telling Milo-- whom he brings along-- that he wants to explore his "roots."  (Curiously, this movie appeared in theaters three years prior to the publication of the famous Alex Haley book ROOTS.) But no sooner do Archer and Milo begin their tour of Zambia than they come across a young physical marvel named Nanu. They eventually trick him into returning with them to America to be Merrivale's new sports-star.

I should note that Tarzan is politically suspect for some readers, given that he seems to validate Euro-American imperialism in being a "white god" who can overpower the natives of Black Africa by his superior strength and agility, plus the occasional invocation of rampaging elephants.  Whatever validity this argument may have is in my mind mitigated by the unreality of Tarzan's "raised-by-apes" scenario.  However, ATHLETE puts aside the uncanny trope of the physical phenomenon raised by wild animals.  Though "white jungle guy" Nanu runs faster than a cheetah and swings through the trees on a vine, he is the child of deceased missionaries and was raised not by animals but by the people of his Zambian tribe.  Therefore his abilities are only those of a natural athlete, even if he does emulate other aspects of the Tarzan-legend-- i.e., he pals around with an imported tiger in place of Tarzan's lion-buddy, and he eventually acquires an American girlfriend named-- ah, you can guess what she's named.

By concocting a less fantastic origin for Nanu, ATHLETE's script avoids some of the dodginess of the premise of a black American, Archer, going to Africa to pursue his roots and coming back to America with a white kid as his protege.  Some have argued that the superior athleticism of Tarzan is a marker of his racial superior to African natives.  But even if this verdict was true for Tarzan, Nanu is raised just like any other member of his tribe, and just happens to emerge as a great athlete.  Archer, in a way, has stepped into the role of the "white fortune hunter" who trespasses on African natives in order to rob or exploit them-- thus putting Jan-Michael Vincent's Nanu in the position of the exploited native.  To be sure, Archer is essentially a nice guy who only wants what any coach wants-- a winning protégé-- and tells his "white lie" (heh) only in his pursuit of athletic excellence, not to make humongous profits from his pupil.  When Nanu finds out that Archer tricked him, Nanu is offended, but the two of them finally make peace.  It's a pretty simplistic comedy, so the script doesn't attempt to foster any deep emotions between coach and student.  But given that the writers didn't do that well with the comic action, it's probably better than they didn't try for drama on top of that.

The marvelous content is supplied by Nanu's tribal godfather Gazenga (Raymond St. Jacques).  At one point he works a spell on doofus Milo, who seems to shrink to the height of three inches, all so that Tim Conway gets his chance to essay some Lilliputian slapstick.  Gazenga tells Milo that he hasn't really shrunk, that it's all in his mind.  This seems like a curious reservation, since several other times in the film Gazenga's magic-- referred to as "voodoo"-- is seen flinging people and things around, with no Mandrake-the-Magician caveats appended.  Gazenga resists the jungle-film characterization of the witch doctor in that he proves witty and highly educated. However, none of that helps him, any more than any other character, from the general lameness of the jokes.  At one point Gazenga-- having regretted his early decision to let his godson go to America-- comes to the States with the intention of bringing Nanu back to Africa.  He's greeted by a Merrivale official who expresses genuine happiness to meet "a real witch doctor."  It would have been easy for the script to make this sound snarky, but the line seems sincere-- so it's just puzzling when Gazenga sticks a bone in his nostrils, as if to mock the official for racism.  Possibly the writer meant it to be filmed one way and the director sabotaged it. Gazenga ends up as a nominal "villain," using his magic to make Nanu fail in the climactic competition, but he too ends up being reconciled.

The film's negotiations of sociological racial-makers are more interesting than the film itself.  Amos and Vincent have the best moments, as they try to imbue their simple roles with authority.  The closest the film gets to authenticity, though, is when Archer encourages Nanu to enter a big track meet with the ambition of winning all the events-- a feat that the original "world's greatest athlete," Native American Jim Thorpe, attempted but failed to execute.  Interestingly, though Nanu succeeds where Thorpe failed, he never internalizes the competitiveness of the American ethos. 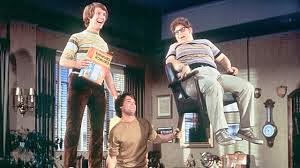 ATHLETE isn't funny, but at least it's not boring. STRONGEST MAN IN THE WORLD is the last of Disney's "college comedies" featuring Kurt Russell as Dexter Riley, a college kid who is a magnet to weird scientific phenomena.  I haven't seen the first two in this series in many years, but decided to check out the last in the series-- THE STRONGEST MAN IN THE WORLD-- as a possible contrast to ATHLETE.

I remember the first two films in the series as being silly but at least lively.  Riley and his fellow clean-cut collegiate buddies would perform some experiment, and it would have some bizarre side-effect.  Older persons in authority would then goggle at Dexter's amazing new powers-- a computer-mind in the first film, invisibility in the second-- and then seek to profit thereby.  The two sides of this exploitation were represented in all three films by "dumb but benign authority," incarnated by Dean Higgins (Joe Flynn), and by "ruthless criminal authority," personified by crime-boss A.J. Arno (Cesar Romero).  The former authority was set up to be "accidentally" flummoxed by the teens' goofy adventures, while the latter was a genuine threat and could be attacked in self-defense, albeit only with slapstick devices.

My memory of the first two Dexter films is that they included a good basic mix of age-representation, with Russell and his "clean teens" balanced against the "elder statesmen" portrayed by well-known faces like Romero and Flynn.  STRONGEST, however, lacks this balance.  Though Russell is top billed, he and his teen buddies have little to do, with all the major comic scenes allotted to the older generation.  STRONGEST includes not only Flynn, Romero, and William Schallert-- the benign professor of the first film-- but also Eve Arden, Dick Van Patten, Harold Gould, Richard Bakalyan, Benson Fong, and James Gregory.  I like all of these performers, and I can hardly object to Joe Flynn getting a lot of screen time since STRONGEST was his last film.  But when the teen-heroes are nearly squeezed out of the story, I find myself wondering what was going on behind the cameras.

Not that it matters a lot.  STRONGEST is one of Disney's weakest comedies, showing actors like Silvers and Flynn to poor effect as they stand around trying to inject life in a pokey script.  Cesar Romero, who made a fine comic villain thanks to his dapper, cultured manner, ends up teaming with Bakalyan for a bit of scaffold-slapstick unworthy of the Three Stooges.

Posted by Gene Phillips at 3:45 PM
Email ThisBlogThis!Share to TwitterShare to FacebookShare to Pinterest
Labels: superlative skills (n), the marvelous