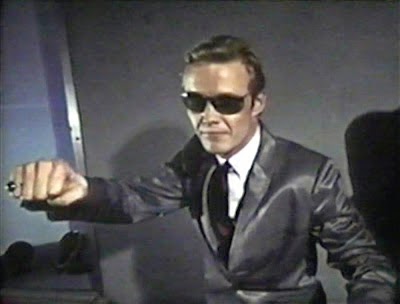 
FEARLESS FRANK is an undercooked mess with the intention of being a superhero satire.  It was the first starring film for actor Jon Voight and the second writer-director outing for Philip Kaufman, both of whom would fortunately go on to much better things.

When I saw the film on television in the 1970s, I'm sure I disliked the bare-bones look of the project. Today I find the minimalism of the project one of its few charms. However, any good will that the film builds up today is quickly dissipated by Kaufman's script. Strangely, though the same writer-director would collaborate on RAIDERS OF THE LOST ARK, here Kaufman labors rather tediously to convince his viewers that all the familiar tropes of superhero films are fundamentally stupid. There's nothing wrong with this in a satire, but FRANK's analysis of superhero melodrama has less wit and content to it than an episode of Jay Ward's DUDLEY DO-RIGHT cartoon.

Frank is a country boy who plans to seek out the big city and make his fortune, not unlike Voight's more celebrated character from 1969's MIDNIGHT COWBOY. Before Frank even makes it to the city, the city comes to him, in the form of a pulchritudinous woman named Plethora (Monique van Vooren, the titular villainess of 1953's TARZAN AND THE SHE-DEVIL.)  She's running away from an obnoxious crime-lord known only as "the Boss," who is served by a Dick Tracy-esque contingent of weird henchmen with names like "the Rat," "the Cat," "Screwnose," and "Needles" (portrayed by famed naturalistic author Nelson Algren). The Boss' henchmen catch up with Plethora just as she appeals to Frank for help, and the hoods shoot Frank to death before he even knows what's going on.

Frank is brought back to life by a scientist known only as the Good Doctor (popular character actor Severn Darden). The Doctor also gives Frank superpowers-- flight, super-strength, and invulnerability-- and sends the naive Frank out to be a crimefighter. Initially Frank accepts this injunction with a sort of blase good humor; he doesn't even seem to remember getting killed.  Over and over Frank shows up as the Boss' goons commit crimes and trounces them easily.

The irate Boss retaliates. Faced with a superhero, he rings up a mad scientist named Claude, who promptly cooks up a robotic duplicate of Frank, usually called "False Frank." Claude cautions the crooks not to interact with False Frank, as it may impair his ability to be a super-killer.  Unbeknownst to the crooks, Plethora sneaks into the lab. Though she shows no further desire to escape the Boss-- in fact, she even helps him commit a crime or two-- she mistakes the robot for the young man who died for her. She doesn't precisely have sex with him, but she lavishes some affection on the automaton.

Meanwhile, back at the Good Doctor's lab, relations between Frank and the scientist deteriorate.  Frank gets tired of being sent out on superheroic errands all the time; further, the scientist's daughter Lois-- one guess what famous character she was named after-- takes a shine to Frank. One night Frank barges into Lois' room, and after a cutaway that reads "Wham! Pow!" in imitation of the BATMAN teleseries, the two have made love-- though oddly, Lois seems to be seducing Frank rather than the other way round.

This begins Frank's fall from grace. He wins a fight with the robot, which fails to drain away Frank's energy, possibly because Plethora sapped the automaton's killer instinct.  The robot escapes but then allows itself to be put in jail. Frank loses any of his beneficent characteristics-- perhaps the robot absorbs them?-- and slaughters a bar full of tipsy patrons. The Good Doctor passes away, and Frank ultimately takes a literal fall and is destroyed. Yet the robot assumes his heroic stature and prevents mad Claude from destroying the whole city.

Though FRANK was almost surely Kaufman's attempt to latch onto the popular satirical coattails of the BATMAN series, Kaufman doesn't show much wit in his deconstruction of superhero tropes. It's enough for him to point out, "this or that trope is silly" and nothing more. In contrast, the BATMAN show had a far more trenchant ability to play inventively with the very absurdities it mocked.

Only in two instances does Kaufman manage a little originality. First, his script essentially swaps the traditional roles of the "gang moll" and the "scientist's daughter," for the former generally functions as the "good girl" in redeeming False Frank, while the latter acts the part of the "bad girl," polluting Frank with a sexual consciousness. Second, although the robot's last-minute savior-act conforms broadly to the combative mode-- even if he has to usurp the main hero's role to do so-- the robot then gets in a boat with Plethora, Lois and the Good Doctor's assistant and sails away, having nothing more to do with superheroics. Kaufman gets in just one semi-good line about how the hero is "leaving us all to find our own endings," but it's the only time his satire comes close to a thematic statement; almost everything else strikes of laziness and unjustified conceit.

Posted by Gene Phillips at 3:17 PM
Email ThisBlogThis!Share to TwitterShare to FacebookShare to Pinterest
Labels: combative ironies, the marvelous