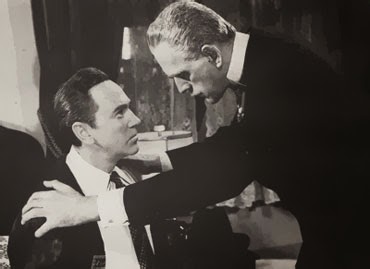 
BLACK FRIDAY was originally intended as a Karloff-Lugosi pairing, with Lugosi as an over-ambitious scientist who transplants part of a gangster's brain into the skull of a mild-mannered colleague, to be played by Karloff. The story goes that Karloff insisted on playing the scientist, and that Universal then decided to use a younger actor, Stanley Ridges, in the part of the colleague. Bela Lugosi was then shunted off into a secondary role, that of a "colleague" of the slain gangster.

While FRIDAY rates as decent time-killing entertainment, I doubt that it did any of the actors' careers much good or harm.  It follows a very well-worn sub-Frankenstein plot-line: mad scientist experiments, sans permission, on an individual, and that individual turns into a monster who must eventually be killed.  One minor deviation from the usual structure is that the film begins with scientist Ernest Sovac about to be executed for his responsibility in his creation's crimes, a contrivance that would be used in 1957's THE CURSE OF FRANKENSTEIN.  The bulk of the story is then "read" by a reporter who has been given Sovac's account of his hubris-filled experiment. Sovac, having recently made great strides in brain-transplant theory, gets to put his theory into practice when his collegiate friend George Kingsley (Stanley Ridges) is killed by the crash of a gangster's car. Also killed in the crash is tough racketeer Red Cannon, so Sovac defies the law and transplants part of Cannon's brain into Kingsley's body.  The persona of Cannon is the first to awaken, and Sovac convinces the confused hood that he's merely been given a new face via plastic surgery. Cannon then goes after the gangsters who tried to kill him, one of whom is Marnay (Bela Lugosi).  However, Cannon's vengeance is interrupted whenever the persona of Kingsley begins to re-assert itself.  Sovac, for his part, begins encouraging the Cannon persona to re-emerge, because the scientist has heard that the gangster has salted away a cache of stolen loot-- and Sovac wants the money in order to expand his research.  Thus Cannon returns to the revenge-trail, resulting in various deaths until he-- and Sovac-- are brought to justice.

Frankly, since Karloff had already played parts like the brutal Cannon, it's not much of a loss to see him pass on another. However, I wouldn't say he did himself any favors with the underwritten role of Sovac, for BLACK FRIDAY's scientist is one of the least interesting "would-be Frankensteins" in the actor's career. I don't know if Lugosi's age or physical condition played into the casting director not giving him the Cannon role, but he does well with Marnay. This part is not any better delineated than that of Sovac, but it's a little more winsome to see Lugosi play a down-to-earth hoodlum.  Stanley Ridges does well with both of his roles, but I have to say that he lacks that extra charisma that makes such a mutation fascinating to behold. 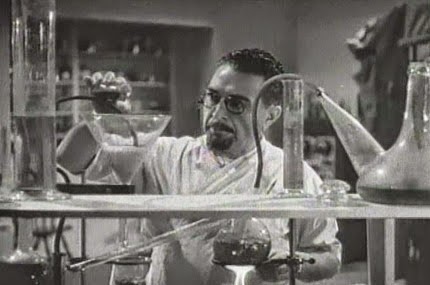 PRC's THE MONSTER MAKER is a much cheaper mad scientist flick, but I enjoyed it more than BLACK FRIDAY.  J. Carroll Naish plays Doctor Igor Markoff, an expert in the treatment of the disease acromegaly.  He's first seen at a piano-performance with his lab assistant Maxine. However, Markoff only has eyes for a lady in the next box, Patricia, engaged to Bob, an age-appropriate young man.  Patricia is so annoyed with Markoff's unwanted attentions that she almost can't enjoy the performance, which is being played by her own father, Anthony Lawrence.

Slightly later, Markoff approaches Patricia, apologizing for his rudeness and telling her that she resembles his late wife. However, Markoff then continues to pursue Patricia with notes and flowers. Her father Anthony seeks out Markoff at his home to settle things. Markoff responds by infecting Anthony with acromegaly, so that his features get heavier and he loses his ability to think coherently, much less play the piano.

To be sure, even when the bland protagonists are afflicted with various sufferings-- including Anthony being forced to seek out Markoff for help, prior to learning what happened to him-- they're still boring characters. Only Markoff is perversely interesting, particularly when we learn from his assistant Maxine that he's not really the original owner of the name. He took it from the man who had seduced his wife from him, which prompted the faux-doctor to infect his wife with acromegaly, so that Original Markoff wouldn't want her any more. However, the wife killed herself, and the faux-doctor killed the original doctor, taking over his career the way the doctor tried to take his wife.  Maxine has stayed with phony-Markoff because she's fallen in love with him, which is apparently the only way the scriptwriters could make it probable that she would go along with his imposture. How the impostor managed to make himself into an expert in the treatment of acromegaly is anyone's guess.

Naish projects an obsessed, intriguing personality throughout, though he's so charmless that it's hard to believe that Maxine would become so entranced by his presence. Eventually "monster" turns on "creator" in a foregone conclusion, but up until that point, the film is fun whenever Naish is on the screen. When he's not-- it's not.
Posted by Gene Phillips at 3:30 PM
Email ThisBlogThis!Share to TwitterShare to FacebookShare to Pinterest
Labels: the marvelous