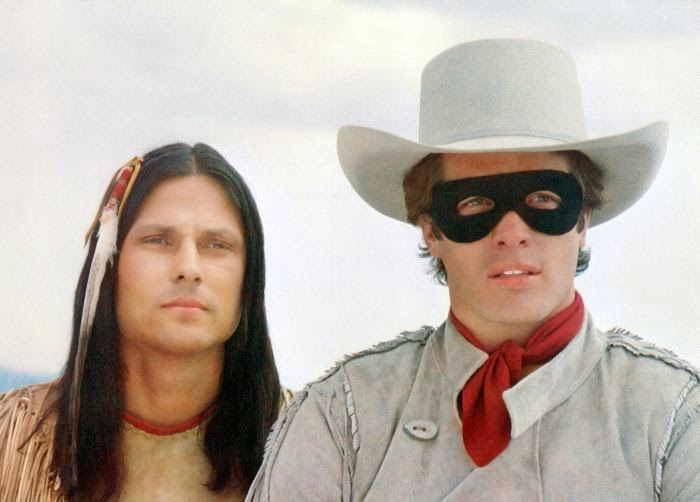 
Whenever I've mentioned THE LEGEND OF THE LONE RANGER in conversation, it's usually been to allude to its role in arguably killing off a spate of "comic book movies" that might have come arisen in the wake of the box-office successes of STAR WARS, SUPERMAN, and RAIDERS OF THE LOST ARK. Hollywood obviously sensed the public's possible enthusiasm for properties that either derived from comic books or had "comic-bookish" reputations. However, though Hollywood expressed interest in a lot of franchises-- including, incredibly enough, PLASTIC MAN-- the possibility of more big-time movies of this type was killed for a time by three major flops: FLASH GORDON and POPEYE in 1980, and LONE RANGER in 1981.

Seeing this iteration of the Lone Ranger today, in the wake of the lively but hollow LONE RANGER of 2014, the 1981 film doesn't seem so bad. Its worst sin is the opposite of Verbinski's flick: where the 2014 Ranger is overblown, the 1981 Ranger-- boasting five talents working on the screenplay-- is simply pedestrian. Interestingly, the later film probably borrows more of its basic elements from the 1981 film, particularly in respect to a Lone Ranger who begins as a bit of a dude, and whose brother is more at home in the Old West than he is.

To avoid some of the negative associations of the most famous Ranger-Tonto origin-- where Tonto virtually gives up his life to become the white hero's sidekick-- young Tonto and young John Reid become bonded in childhood, when the Indian boy takes the white boy into his camp following the death of John's parents. John stays with Tonto's tribe long enough to make clear that the Ranger will be a liminal figure, straddling the cultures of "White" and "Red." Then John returns to the white man's world and becomes a lawyer.  He returns to the Old West to join his brother, already a Texas Ranger, and this leads to the "slaughter of the innocents" of which Reid, the solitary survivor, will dedicate himself to justice.  This time, however, Tonto is somewhat more proactive. It's his advice to the bereaved lawyer-- telling him about the good effects of silver-tipped arrows-- that leads the future Ranger to come up with his famous "silver bullet" icon.

Directed by former cinematographer William A. Fraker, RANGER usually has a fine visual look, with some strong action-sequences. However, Fraker and his writers seem to be just ticking off each point of the famous "legend" in desultory fashion.  Even the script's new developments don't help. The Ranger's foe Butch Cavendish is no longer a penny-ante outlaw: he's a Darth Vader of the Old West, planning a grand conspiracy to kidnap President Grant and force the government to give Cavendish title to a huge parcel of land.  This idea of crippling the nascent United States by dividing it up-- not via secession but for a supervillain's ego-- is very much in tune with the seminal "Ranger" scripts of radio and television, where the hero is always out to protect the unity of the future America. But the script is so uninspired, that Cavendish's scheme comes off as unimpressive and untenable rather than grandiose.

And finally, even without the bad publicity that arose when the owners of the Ranger franchise filed a "cease and desist" court order against Clayton Moore-- the film probably would have failed due to the lack of charisma of both of its leads, Klinton "voice-dubbed-in" Spilsbury and Michael Horse. Other supporting actors do themselves well, particularly Juanin Clay as Reid's love interest, but without strong performances in the lead roles, the film was doomed from the start.

I do give the film a "fair" rating in the mythicity category simply for attempting to formulate a new version of the Ranger mythos that placed more value on Native American traditions.

Posted by Gene Phillips at 2:26 PM
Email ThisBlogThis!Share to TwitterShare to FacebookShare to Pinterest
Labels: combative adventures, outre outfits (u), the uncanny