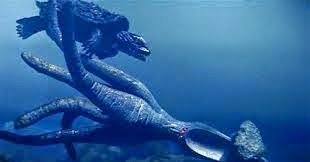 Having never seen the Gamera films in order, I wasn't sure when they turned into pure juvenilia. As it happens, GAMERA VS. VIRAS marks the transition well-- which is about all it does well. This is the first time, according to the Mill Creek translation, that Gamera acquires the cognomen "friend of all children," and not one but two precocious tykes find that they can call on his help like Jimmy Olsen summoning Superman, but with no rationale whatever.

The image of Gamera as a monster that stomps on people while he feeds on oil-refineries has gone out the window. An alien spaceship descends to Earth, planning to raze humanity so that its masters can take over the planet. Gamera intercepts the candy-colored spaceship and drives it away.  But the aliens don't give up easily. When they learn that Gamera cherishes children, they abduct two smart-ass kids-- Boy Scouts residing in Japan-- and threaten to kill them, so that Gamera backs off.

Eventually the boys get loose and free Gamera from the aliens' control, but their leader-- a gigantic octopus-critter named Viras-- engages the giant turtle in battle.  Up to this point, the story has been banal in the extreme, and the big battle-scene is no different. Viras is a poorly designed kaiju-creature, lacking any of the interesting powers seen in Barugon and Gyaos.  The references to myth and folklore, or even to average facets of Japanese life, are gone. 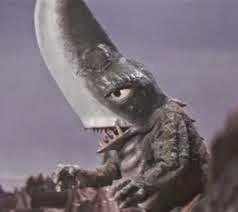 After this low point, the series had nowhere to go but up. GAMERA VS. GUIRON follows roughly the same pattern as VIRAS,.in that once more two Earth-kids are caught up in alien machinations. However, the film is much better paced and plays better to a juvenile sense of wonder.  There may not be any folklore-references, but the kids' sincere interest in the cosmos is undercut by their parents' insistence on mundane reality, to the extent that one of the boys remarks, "Grownups don't know how to dream any more."

Two boys and one girl witness the descent of an alien ship to Earth. The boys get aboard and the ship takes off with them, and when the girl tries to tell adults what happened, her story is dismissed as a child's fantasy.  The ongoing reactions of the adults as they look for the lost children are mild compared to what one would expect in reality, but this minor conflict enhances the goings-on in the otherworldly setting.

The automated spaceship takes the kids to Tera, which is the unseen tenth planet of the solar system-- unseen because it occupies the precise space opposite to Earth in its orbit around the sun. As science this is nonsense, but as juvenile SF, it's a fun motif.  The kids find that there are two species of titanic monsters on Tera: flying monsters that strongly resemble the creature Gyaos from the earlier film, and one big knife-headed beastie named Guiron. In a scene elided from the American release of GUIRON, the knife-monster uses his sharp snout to chop a Gyaos into mincemeat. True, there's little or no blood, but it's still a fairly graphic scene for a juvenile film.

The kids encounter the last two survivors of the once advanced civilization of Tera: two young women in flashy space-costumes.  They spin the children an interesting "fall from grace" tale about how their civilization was destroyed by a computer malfunction. The same malfunction somehow spawned or summoned monsters to infest Tera: both the Gyaos-es and Guiron are the results of this, even though the alien women have managed to enslave Guiron to their will.

Since Tera is doomed, the aliens plan to emigrate in their remaining spaceship. However, they need rations for the long trip-- and they think a supply of little boys' brains would be haute cuisine. They're just on the verge of harvesting their brains when Gamera, seeking the boys, arrives. The aliens hurl Guiron against the big turtle, and Gamera is temporarily bested.  However, the boys liberate themselves and manage to release Guiron from the women's control.  Guiron destroys the alien base, which fortunately gives Gamera the chance to recover. Gamera then engages Guiron and wins the second bout, and returns the kids to Earth.

It's no kaiju classic, but GUIRON at least sports two appealing giant monster battles, and an adequate if not especially original script.
Posted by Gene Phillips at 4:11 PM
Email ThisBlogThis!Share to TwitterShare to FacebookShare to Pinterest
Labels: combative dramas, the marvelous