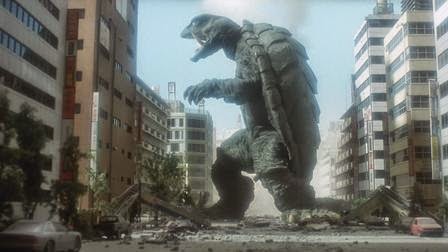 With the exception of 2006's GAMERA THE BRAVE-- which I didn't like and don't plan to re-screen any time soon-- these three 1990s films, directed and co-written by Shuseke Kaneko, were the final hurrah for the turtle-monster.

The first time that I screened 1995's GUARDIAN OF THE UNIVERSE, I thought that it was a strong, substantive upgrade of the enjoyably loony series of the 1960s and 1970s. In re-screening these films, I can see that on occasion they had a greater claim to mythopoesis than I used to believe. Still, compared to the original Godzilla films, the mythic material appears in a very hit-and-miss manner. Most of the early films get by purely on the absurdity of a giant turtle who defends children from harm.

Kaneko's series does not forswear the events of the old films, but he erects a more sophisticated science-fiction explanation for them.  Gamera is not just a freak of prehistoric nature mutated by radiation, but a creation of an ancient civilization, one "programmed" to protect the Earth against its enemies. The foremost enemies here are a trio of Gyaos-birds, but humanity has unwittingly conspired in their resurrection through its pollution of the atmosphere.  In addition, humans hurl their military forces against Gamera, despite the protests of Asagi, a psychic Japanese woman who has formed a link with Gamera and knows that his basic instincts are protective. Asagi performs basically the same role in all three films and provides a decided improvement on the old series' concentration of cutesy kids as viewpoint-characters.

The FX are far more impressive than anything in the old Gamera films, and the script is far more logical. Still, I must admit that the first film seemed a little pedestrian this time out, lacking the wild inventiveness of the old flicks. Still, it remains one of the better kaiju films of the period. 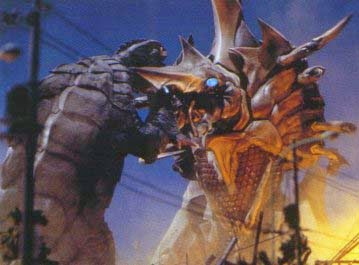 GAMERA 2: ADVENT OF LEGION is a serviceable follow-up, but it necessarily lacks the excitement of the first film's conceptual reboot. LEGION begins a year after Gamera's victory over the Gyaos-creatures, and the heroic monster has apparently stayed out of sight, not even emerging from the sea to feed on the odd volcano, much less raiding human refineries.

A new menace arrives from space: a meteor which unleashes not only a brood of killer insects but their own ecosystem, consisting of alien plants that immediately take root in Earth-soil.  After the insects have killed various victims, Gamera emerges from the sea and begins killing the intruders, who are dubbed "Legion" by an observer, because they are many, a la the Biblical quote. The legion-creature's Big Mama appears on the scene and engages Gamera in combat, and in keeping with the usual pattern, she wins the first bout and leaves Gamera seriously wounded.  Queen Legion then leaves, seeking new ground on which to expand her brood.

While humanity plays its usual role, attempting to short-circuit the creatures with technological weapons, Asagi continually tries to reach out to Gamera psychically. She finally succeeds, and Gamera rises to fight again, with the expected results.

As brood-beings go, the various incarnations of Legion are just okay: I found them visually far less arresting than the similar Godzilla-foe Megaguirus, though these monsters appeared four years later. The film's most interesting moment appears at the coda, when one character theorizes that Gamera isn't primarily a defender of humanity: that the hero-monster's main goal is to preserve the Earth-- and that if humans endanger the planet, they may find themselves on the wrong end of Gamera's fire-breath. 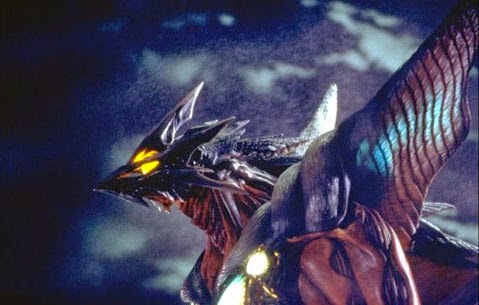 As stated before, Gamera's myth always remained secondary to the more impressive aura of Godzilla, and although there have been some Godzilla films that were as bad as the worst Gamera movies, there were never any Gamera films equal to the best of the second-tier Godzillas (the original GOJIRA occupying its own primary tier).

GAMERA 3: AWAKENING OF IRYS is the happy exception, for IRYS is as good as the best second-tier Godzillas.  Just as a few Godzilla-films have dealt with viewpoint-characters obsessed with terminating the big lizard, IRYS introduces Ayane, the first human who lusts to see the big turtle brought low. During one of Gamera's battles with Gyaos, the young girl and her family were trying to evacuate their house before the combatants came too near.  This flashback sequence is seen in chaotic fashion, capturing the terror of Gamera's presence even when he has been given a sympathetic nature.  Gamera accidentally crushes the house and kills Ayane's parents.

Years later Ayane happens upon the egg of a Gyaos-- though apparently a mutant offspring-- beneath her village's temple.  Despite the fears of her schoolmates, Ayane psychically bonds with the creature, just as Asagi did with Gamera.  When the creature is a helpless, somewhat bird-like fledgling, Ayane names it "Irys," after her pet cat, also lost in the cataclysm that took her parents. The creature matures quickly and begins bonding with Ayane physically as well as psychically.

Gamera makes his usual appearance and gives battle to the now gigantic Irys. However, all the intense delving into psychic matters causes Ayane to unlock her buried memories. Belatedly, she realizes that she helped cause her parents' death, delaying them by looking for her cat. This is one of the more emotionally intense scenes seen in a giant monster film, particularly when one realizes that she has named the monster "Irys" not for her conscious reasons-- he reminds her of her desire for vengeance-- but because the name of the cat reminds her of her subconscious guilt.

Gamera proves unusually forgiving for a giant monster: he reaches his paw into the monster's chest and liberates Ayane, which is the beginning of the end for Irys.  The final battle is again an above-average display of FX, but this time they serve as a counterpoint to Ayane's emotional turmoil.

Kaneko ends the series on an ambiguous note, and one might wish that this high point had been the final battle for the Big Bad Turtle.


Posted by Gene Phillips at 3:47 PM
Email ThisBlogThis!Share to TwitterShare to FacebookShare to Pinterest
Labels: combative dramas, the marvelous