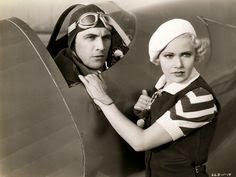 The earliest of these is Universal's THE PHANTOM OF THE AIR, starring Tom Tyler as the heroic aviator Bob Raymond. Ten years later, Tyler would play comics' most famous "Phantom," but in the 1933 serial, the name refers to the experimental plane Raymond is hired to fly. The plane, invented by a Doctor Edmunds, is the serial's sole metaphenomenal presence, in that Edmunds powers the plane with a principle called "Contragrav," which also allows him to operate the plane remotely, sans pilot. All the other elements, particularly the gang of smugglers who want to steal the Phantom's secret, are entirely mundane. In fact, the gravity-schtick barely registers in most episodes, which are replete with daredevil plane stunts of a naturalistic kind, since these make the hero look good.

The most interesting thing about PHANTOM is that in 1933, a lot of the tropes associated with the serial hadn't become quite as "rote" as one usually sees in 1940s and 1950s serials. In most of the latter, the heroine is already the girlfriend of the central male hero, or if she's not, it's strongly implied that she will become so at the serial's end. PHANTOM begins with Dr. Edmunds and his daughter Mary watching an aerial competition between Raymond and his foremost pilot-rival, Mort Crome. Edmunds is looking for a man to fly the Phantom, and Mary, who has already taken flying lessons from Crome, favors him over Raymond. Of course, in due time Mary comes to favor Raymond over Crome, even before she learns that Crome is the leader of the smuggling-gang. But the slight diceyness regarding Mary's favor in the early episodes makes them a little more in the nature of a straight romantic melodrama. Later, even when action becomes the dominant mode, Mary is still a little more interesting than Raymond. Whereas many serial-heroines are relegated to standing on the sideliines, Mary Edmunds, though unable to fight or shoot, still courageously puts herself out there, using her flight-abilities to help Raymond whenever possible.

The aerial action-scenes are efficient but unexceptional. 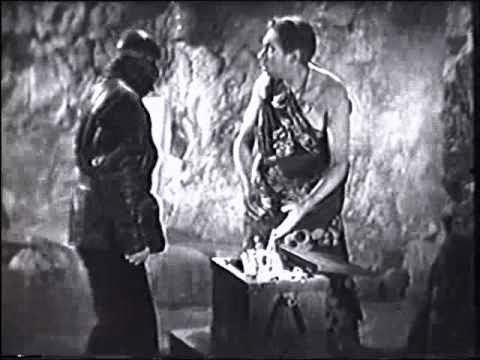 THE FIGHTING MARINES doesn't feature much plane-action, though planes are an important part of the storyline. The U.S. Marines seek to establish a Pacific base on Halfway Island, but their airplanes keep mysteriously crashing due to a "magnetic dead spot" that throws their instruments out of whack. Two fighting marines, Sgt. McGowan and Lt. Lawrence, eventually discover that the "dead spot" is of human origin, created by a magnetic ray. Here the ray is not the only metaphenomenality, for the creator of the ray is a costumed individual who calls himself the Tiger Shark.

MARINES, like PHANTOM, starts out with some naturalistic elements-- the clever Lawrence manages to embarrass dum-dum McGowan so that he Lawrence can steal his date-- but the serial quickly becomes devoted purely to running battles between the marines and the henchmen of the Tiger Shark. The action is just OK, but the Tiger Shark's reasons for wanting to keep the island private aren't clear until late in the serial, where it's revealed that he's seeking a hidden pirate's treasure. As the photo above shows, the villain's costume is fairly drab as well, particularly when compared to the villain of FIGHTING DEVIL DOGS, which debuted the same year and also pitted the U.S. military against a masked supervillain. 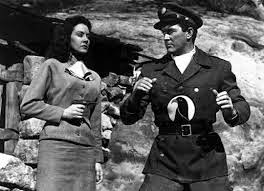 BLACKHAWK was one of the last major serials before the format petered out in 1955, as well as the last to be adapted from a comic book property. By that time the Blackhawks were no longer fighting Nazis as during their debut in the 1940s, but Communists, which was pretty much the case with the contemporaneous comic book. However, the serial does ring in some changes. The serial begins by telling audiences that the Blackhawks never use guns, which is something the heroes weren't shy about doing in any era. In truth, there are times that the heroes do fire handguns, but they depend much more heavily upon fisticuffs, resulting in some of the best fight-scenes seen in a Columbia serial. One of the other major tropes of the BLACKHAWK comic, in which the multi-national members evince strong accents, is totally dropped, though most of the standard names-- Andre, Stanislaus, Chop-Chop-- are at least used. Chop-Chop, played for ethnic comedy relief in the comics, is given a sobersided portrait here.

As with the other two serials reviewed here, the only element of personal interest appears in the opening episode. A woman from Stanislaus' past, the mysterious Laska, approaches him at Blackhawk HQ and tries to lure him back to his native land, now held by the Communists. When Stanislaus refuses to leave the Blackhawks for the Commies, Laska has her henchmen subdue the hero, and then sends in a double to take his place and sabotage the Blackhawks' operation.

After that plot-thread is disposed of, the remainder of the serial concerns the Blackhawks chasing around after Laska's agents as they seek the mysterious "Element X,"which can be used both as a super-fuel and for making death-rays. Though the serial was produced by the notorious cheapskate Sam Katzman, BLACKHAWK looks pretty good, partly thanks to strong costume design on the simple but effective comics-costumes, partly to the crisp cinematography of William P. Whitley.
Posted by Gene Phillips at 2:47 PM
Email ThisBlogThis!Share to TwitterShare to FacebookShare to Pinterest
Labels: combative adventures, the marvelous