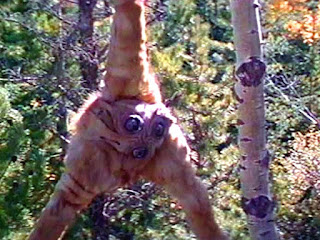 After watching these three films on one of the Mill Creek discs, I was moved to respond to their general badness with a similarly bad pun. For instance, since all of them burn up lots of time having characters wander through assorted forestlands, I might file them all under "Forests, Primarily Evil." Well, I admitted it's a bad pun.

For a film with the word "sapien" in the title (as well as a lengthy subtitle I refuse to type), HYPER SAPIEN certainly doesn't boast much in the way of brain-power. It's true that the biggest name in the cast, Keenan Wynn, is given some half-decent philosophical ruminations about Earth's first visitation by denizens of an advanced alien civilization. But everything else about the story is routine.

The spaceships of the advanced civilization happen to be passing Earth, with no intention of revealing themselves to humanity. Two females, teenager Robyn and her little sister Tavy, take their three-legged alien companion with them as they land a ship in the Canadian wilderness to get a close look at these strange human critters. Robyn soon kindles a romantic relationship with a young motorbike-rider named "Dirt." This romance is doomed if Robyn's elders can't be persuaded to change their minds about their "no-contact" policy, and if one is the mood for a simple "alien romance" story, I suppose one could do worse. SAPIEN was one of the last directorial efforts from Peter Hunt of the much-esteemed ON HER MAJESTY'S SECRET SERVICE, so SAPIEN is never less than professionally executed, and the three-legged alien "Kirbi" is a well designed marionette. But the parts are still not greater than the whole. 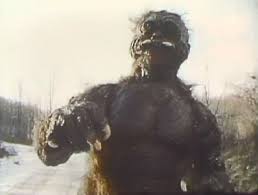 Don Dohler's THE ALIEN FACTOR certainly is not professional in any way, but many fans give it points for being reasonably well-made for a no-budget effort, mostly filmed in forests around Baltimore and acted by amateurs. Even though the story, the characterization and the acting are all substandard, I like to think I would have rated FACTOR a little higher if I thought the film's alien beings were inventive. But even though the flick was produced by a visual effects company, the feature's creatures-- two played by actors in monster suits, one by animated effects-- are just cut-rate boogeymen.

The aliens-- three creatures being transported to an alien world in a spaceship-- become castaways when the ship crashes, and they respond by immediately starting to kill the locals in the nearest small town. The ship's pilot survives long enough to tell an investigator (himself something of a queer duck, and thus a setup for a transparent twist ending) that two of the three creatures are mindless killing-machines, while the third is an intelligent species that just likes to kill. The script isn't consistent on this point, sometimes having characters who should be in the know speak as if all of the unwanted visitors are mindless beasts. Maybe the characters got confused, since the distinction about the one intelligent prisoner doesn't matter in the least: the intelligent beastie's actions are indistinguishable from those of the "animals."

The only interesting thing about the production is that because the director (and writer and producer) didn't have money for a lot of FX, he often has the three creatures stalking their victims in slow-paced suspense-scenes. Dohler's technique reminded me of the slasher-films that would become popular about five months later that same year, when HALLOWEEN debuted in October 1978. Of course the slashers didn't invent the notion of monsters stalking serial victims. Still, FACTOR may be one of the first flicks to put aliens in the position of serial stalkers, for whatever that may be worth. 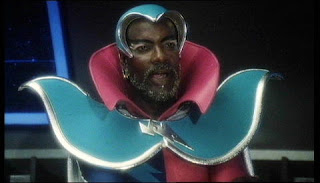 ESCAPE FROM GALAXY 3 starts out in a outer space setting, but most of the film's running time also transpires in a forested wilderness. Since it's an Italian production I suppose that the shoot was somewhere in Europe; and most of the actors have Italian names like "Fausto di Bella," while the director has a long pedigree in Italian action/exploitation films. This is one of the few times he attempted Italian space opera, which as I've commented before always seems to be more indebted to Flash Gordon and Buck Rogers no matter what current films have become big box-office. Though there are a few STAR WARS tropes in GALAXY-- notably the idea of young space-saviors fleeing the wrath of a tyrannical regime-- one has only to look at the extravagant costuming of the villain Oraclon (seen above) to know that the film's main homage is to Alex Raymond. Not only is Oraclon (who is in no way oracle-like) dressed like a flaming version of Ming the Merciless, he even sports glitter in his beard.  Nope, no sombre, samurai-armored overlords here.

Though GALAXY is idiotic from start to finish, it's generally a pretty lively film. We begin with evil Oraclon demanding the immediate surrender of the world of Exalon, including its orbiting space station. For some reason the king of Exalon is on the space station when Oraclon comes calling, as are the king's daughter-- who sports the name "Belle Star" (note the single "r")-- and a kick-butt officer named Lithan. The king bravely defies Oraclon's forces, which then overwhelm all the might of Exalon with ridiculous ease. Dismayed, the ruler sends his daughter and his kick-butt officer to summon help from their galactic allies. Thus the two young people escape while all of Exalon is destroyed.

Damage to the couple's ship lands them on an unknown world inhabited by primitive, light-skinned natives who wear toga-like garments and have no weapons more advanced than spears.The princess doesn't seem overly moved by the destruction of her planet and her king-daddy; she's fascinated by the primitive ethos of the natives, in part because the denizens of Exalon are immortal and don't normally bother with little details like food and sex. The toga-people aren't nearly as enthusiastic about the weird people who fall from the heavens, and they almost sacrifice the Exalonians. The aliens manage to make friends after Belle Star saves an innocent child from potential death.

The sequences in which Belle Star and Lithan wander about bonding with the natives and learning about sex are generally dull, even in the nude scene (women bathing, of course). Fortunately, Oraclon shows up and starts hunting for the fugitives. Unfortunately, he doesn't find them on his first pass, giving the Exalonians more scenes with dancing, athletics and other bucolic pastimes. By this time Belle Star and Lithan fall in love.

When Oraclon returns and endangers the natives, the noble fugitives surrender, and are taken aboard the tyrant's spaceship (recycled from 1978's loony STARCRASH). It's only at the climax that GALAXY-- sometimes marketed as "STARCRASH II"-- that this film gets as crazy as the earlier film. Oraclon announces that he wants to marry Belle and that he's going to condemn Lithan to slavery in the mines. Being a sport, he allows the young lovers one last, lingering kiss. This sex-play apparently activates in Lithan powers that are referenced nowhere else in the script, for he suddenly fires lasers from his eyes and sizzles Oraclon to a crisp. The tyrant's guards are beaten with yet more ridiculous ease, after which the sexy young things escape, taking the overlord's hostages with them as the spaceship is blown all to hell. The film ends with Belle and Lithan vowing to return to the happy mortality of that world that will later be known-- "AS EARTH!"

(And anyone who didn't see that one coming from a mile away doesn't deserve to call himself a science fiction fan.)

Posted by Gene Phillips at 3:11 PM
Email ThisBlogThis!Share to TwitterShare to FacebookShare to Pinterest
Labels: combative adventures, the marvelous