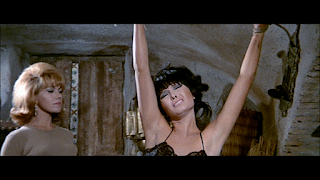 I've been catching up on my Euro-action viewing thanks to various downloads on Youtube lately.

First up is KILLERS ARE CHALLENGED, the second outing for Bob Fleming, who swiped his last name from the author of James Bond and his code-number, "077," directly from Bond. It's a very simple plot, in which Fleming (husky Richard Harrison) masquerades as a scientist in order to find the fellow who's been knocking off other scientists. The villain's plot is never very clear, but Antonio Margheriti's direction is fluid, making good use of North African locations, and the narrative includes at least three gorgeous Euro-babes.  As if to make up for the rather pedestrian action-scenes-- Fleming spends lots of time running after people and shooting at them-- there's an extra-long slapstick bar-fight scene. Nothing great but watchable.

From the standpoint of metaphenomenal cinema, KILLERS qualifies only in terms of "outre devices." Fleming himself doesn't use much, except for a ring that can supposedly detect poisons, without any explanation of the technology behind it. Much more entertaining is a scene in which Fleming is spirited away from enemy spies by a British agent whose car boasts one colorful gimmick: it can shoot a soapy looking liquid that can obscure the windshield of a pursuit vehicle, or blind an enemy on foot (it manages to do both in that single scene). 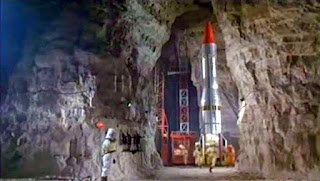 FX-18 is one of many films based on a series of spy-books starring an agent named Francis Coughlan. This series commenced, like James Bond, in the 1950s. The overall action is entirely more mundane than KILLERS, though toward the end Coughlan (aka FX-18) finds a secret installation in Turkey, from which the villains intend to fire a nuclear missile. Nuclear missiles in and of themselves are not metaphenomenal. However, the idea of their being appropriated and/or utilized by small conspiratorial groups is a "bizarre crime," so FX-18 qualifies for the uncanny version of a "bizarre crime" just as does the original Fleming novel THUNDERBALL.

There are some scattered "Euro-babes" here, but the director doesn't use them nearly as well as Margheriti does.

Posted by Gene Phillips at 11:53 AM
Email ThisBlogThis!Share to TwitterShare to FacebookShare to Pinterest
Labels: bizarre crimes (u), combative adventures, diabolical devices (u), the uncanny