ULYSSES AGAINST THE SON OF HERCULES (1962) 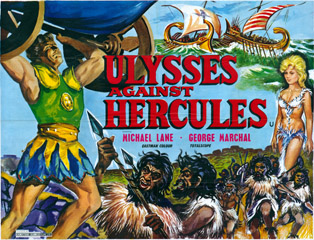 
The original title of this *peplum* flick was "Ulisse contro Ercole," and though the English dub has a prologue explaining that the protagonist "Heracles" is the "son of Hercules," the hero himself talks as if he's the direct descendant of Zeus and that he performed many of the feats associated with the famed demigod, like slaying the Hydra and taming the steeds of Diomedes. Thus it's very likely that the original script always intended for the hero to be Hercules himself, and that the "son of Hercules" label was just to market the film alongside a crop of other films supposedly featuring other "sons" of the demigod.

That said, both the Italian and the English titles are accurate in placing the name of Ulysses first, because even though the story teams up Ulysses and Hercules, Ulysses earns more far more sympathy. Writer-director Mario Caiano had put in his time with earlier peplum tales and similar fare, but here he breaks from the formula more than most films of the type do, with interesting if not riveting results.

Caiano basically tosses out the key concept of Homer's ODYSSEY-- that Odysseus (the Greek original of Roman "Ulysses") wandered at sea for many years as a punishment for blinding Poseidon's son the Cyclops. Instead, just as Ulysses almost gets back to his home Ithaca, the gods send Hercules to capture the Ithacan general and turn him over to the tender mercies of the Cyclops he wounded.  Hercules doesn't want to do it, not so much out of sympathy for Ulysses but because he's preoccupied with his lady-love Helen, who's slated to be given to a Greek prince in a purely political marriage.  Nevertheless, Hercules obeys his celestial dad. Strangely, his first gambit is to hire a group of Greek pirates to take Ulysses prisoner. Since the pirates don't have much of a role in the story, I theorize that they only appear to give Ulysses some opponents against whom he can fight with his purely mortal skills.

Once the pirates are vanquished, Hercules himself takes Ulysses prisoner and attempts to escort him back to wherever the Cyclops lives-- though naturally he secretly admires the mortal's skill and cleverness. In the film's high point, they're waylaid by a weird cult of bird-people who want to sacrifice both of them to their deity, "the Great Vulture"-- who, unfortunately, does not make an appearance. The bird-men's queen is attracted to both heroes and proposes that they should fight one another, with the winner becoming her king while the loser feeds the Great Vulture. However, the fight never comes off. For some reason the bird-men tie the two heroes to a big tree and dance around them for a while. A lightning-bolt hits the tree and distracts the bird-men long enough for the heroes to break free and escape. Strangely, though lightning is usually the province of Zeus, neither man wonders if Zeus intervened to free them. Instead, when Hercules grabs up a flaming branch, Ulysses tells him to use it "like Prometheus."

A little later, the two battling buddies are separated. By some contrivance Hercules finds himself in the kingdom of his beloved Helen, which is now besieged by the forces of King Lagos and his hairy-bodied "cave dwellers." Meanwhile Ulysses  has fallen into the hands of Lagos, who isn't so much the standard evil tyrant as a twit with a mammoth ego. The scenes between Ulysses and Lagos are played for tongue-in-cheek humor, in which clever Ulysses solves every riddle Lagos puts to him, proving his true identity. Lagos wants to use Ulysses' skill at strategy to help him conquer Helen's city, but Lagos is his own worst enemy. Somehow he gets it into his head that Ulysses ought to be able to make wings that can help a man fly like a bird. When the wings don't work out, Lagos puts Ulysses in a room with a stone ceiling, slowly lowering down upon the hero. Fortunately for Ulysses, Hercules leads Helen's army to victory over the cave-dwellers and rescues Ulysses as well. Things are then given a happy ending as Hercules implores Zeus to spare Ulysses. Zeus does so, and everyone goes about his or her merry way.

I rate its mythicity low in that all of these reshufflings of classic myths don't add up to much. But compared to the more formulaic Hercules-films, this one has a little appeal in terms of character interaction.
Posted by Gene Phillips at 3:22 PM
Email ThisBlogThis!Share to TwitterShare to FacebookShare to Pinterest
Labels: combative adventures, the marvelous