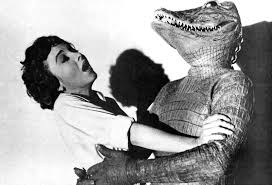 This time I'm linking two of Beverly Garland's creature features, both of which are greatly aided by her ability to suggest a strong presence, even when the script gives her little to work with.

ALLIGATOR PEOPLE was directed by journeyman Roy Del Ruth, who had produced little in the way of metaphenomenal cinema prior to the 1950s, when the genre became "hot" for a time. Similarly, all three of PEOPLE's scripters had middling contact with this type of cinema, with Orville Hampton boasting the most credits, including THE FOUR SKULLS OF JONATHAN DRAKE the following year.

The film's biggest drawback is that the film's "Alligator Man" simply isn't well-designed enough to go down in "creature feature" history as one of the better movie-monsters, nor is the monster risible enough to become known as one of the worst. The film creates a strong mood of suspense from the opening, which begins in media res, as two sincere physicians seek to uncover the secrets hidden in the subconscious of their nurse Jane Marvin (Garland).

Having established the framework, the audience sees Jane and her new husband Paul Webster on a train as they voyage to a honeymoon retreat. Paul receives a telegram before the train leaves, and promptly disappears. Though the script suggests a mysterious injury in his past, Jane is unable to account for his inappropriate leavetaking. She spends months looking for her lost husband, and finally receives a clue that takes her to a desolate Louisiana swamp, and a mansion that was once the home of Paul Webster.

The mansion is one of the better sets of its kind in low-budget horror-films of the period, creating a mood of stultifying oppression. Garland first encounters the mansion's handyman Mannon (Lon Chaney Jr.), a raucous drunk who wears a hook in place of a hand lost to one of the swamp's gators. After that she meets two other mysterious locals: Lavinia, the matron of the manse, and her physician Sinclair, neither of whom initially tells her anything about the missing husband.

It eventually comes out that Lavinia is Paul's mother, and that Sinclair has been treating Paul with a radical "cobalt ray" technique that healed him of the wounds he'd received in his pre-marital accident. However, the ray-treatment has had a side-effect not only upon Paul but on other patients of Sinclair, seen fleetingly in a few mansion-scenes. They have regressed to a reptilian mode of life, that of "the Alligator People." The script doesn't provide much of an explanation, even of the "pure BS" variety, for this biological regression, but it's tailor-made for raising the ire of the gator-hating handyman.

PEOPLE is very effectively photographed, and the cast is above average. Chaney, for one, gets one of his best roles of this decade. But the script fails to link its laborious gimmick to anything of deeper resonance. For instance, Hampton's script for FOUR SKULLS isn't any masterpiece, but at least the curse in that film resonates with concerns about post-colonial anxieties. Given the Louisiana-Gothic setting, maybe I wanted some connection between Paul's fate and some mysterious physical atavism in his family, but Sinclair's scientific justifications for the transformation just don't lead anywhere interesting. The film's suggestion of problems that compromise Jane's marriage showed some promise, but this too peters out as the film focuses on Mannon's Ahab-like obsession with alligators and alligator men.

Visually speaking, PEOPLE  is a solid B-film, but even a better designed monster probably couldn't have boosted the so-so script. 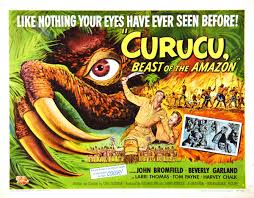 Like many monster-lovers I usually felt cheated by films that promised a monster and fobbed off the viewer with your basic "phantasmal figuration."  One tended to expect fake ghosts in old dark houses, but in the Amazonian jungle?

Beverly Garland plays more something closer to a supporting role in CURUCU, given that Curt Siodmark's script and direction place more emphasis on male lead "Rock Dean," a he-man adventurer whose father owns a plantation somewhere near the Amazon. Rock is played by John Bromfield, who had just essayed a somewhat dickish alpha-male in 1955's REVENGE OF THE CREATURE, Possibly Siodmark tailored the script to that persona, for Rock has all the sensitivity of the object for which he's named.

Rock's precise job isn't clear, but apparently at times he trouble-shoots problems for his plantation-owning daddy, who only appears in one scene near the beginning, when Rock, his dad and two other land-owners confer on their current dilemma. In recent weeks five natives have been slain by an assailant that the natives believe to be the monster "Curucu." The terrified natives are retreating back to their villages, leaving the plantations understaffed. The elder Mister Dean believes that the natives are just striking for more money-- thus establishing his level of sympathy for the dead people-- but Rock believes that he can ferret out the truth behind the monster by taking an expedition to the area of the killings.

Needing inoculations, Rock seeks out the local doctor. Hearing that the office now includes a female physician as well, Rock shows he's a chip off the parental block by stating that "she probably couldn't find a man, so she married her career." His tune changes when he beholds the lovely Andrea (Garland), who accepts his invitation on a date.

Rock regales Andrea with his glorious mission, boasting about the knowledgeable guide he's engaged, a native fellow named Tupanico. Andrea then reveals that she has an ulterior motive for accepting the date: she too wants to journey to the Amazon, to purchase from the local headhunters a potion that she can use for medical purposes. Rock says no; the jungle's no place for a woman. Andrea then not only leaves him flat, she moves in on his guide and buys Tupanico out, forcing Rock to include her on the trek if he wants his experienced guide.

While on the trek, the clever Andrea proves herself valuable as well. In one sequence, Rock is able to use the presence of a female in his group to demonstrate that he Rock has no hostile intent. In addition, while Hard Rock is happy to let one of the natives die of appendicitis so as to avoid trouble with the tribal witch-doctor, Andrea won't have it. She has the porters take the native along to a jungle settlement, presided over by a Catholic priest who views native religions as "darkness." Andrea saves the life of the native Tico and earns his gratitude.

However, another native is murdered, and Andrea sorta-kinda sees something that might be Curucu. She runs wildly and almost gets herself killed in the jungle, losing all of her points for cleverness and compassion as she becomes just another helpless woman to be rescued by Rock. Later, despite her reasons for coming along-- certainly nobler than Rock's self-interest-- she berates herself for having forced her way into the expedition. Still, the fruits of her generosity later save the two of them from death, though neither Rock nor Andrea brings this up.

After various jungle perils-- many the spawn of stock footage-- Rock and Andrea are captured by headhunters under control of the man who has been killing in the guise of the beast Curucu. Given that there aren't many red herrings in the jungle, no one should be surprised that it's Tupanico, who's already expressed some ambivalence toward the white man's culture.  He also seems to be a bit ambivalent toward Andrea, for he gives her the potion she wanted, as if he plans to let them go for pledging silence. Rock's response to this generosity is to start a fight with the fake monster. Rock, who hasn't passed much if any remarks on tribal culture, also starts sounding a little like the Catholic priest, adjuring the guide for turning his people back to their primitive religion. Rock and Andrea have no chance of escaping the headhunters, but they're saved when the village is attacked by Tico and his allies, out to save the "white mem'sahib." (Does Rock ever say anything along the lines of, "You sure were smart to save that native, honey?" Not much he doesn't.)

CURUCU is certainly not a good film. The Curucu-costume is so bulky, it's hard to believe its wearer could effectively step on a bug, much less kill a human being. The stock footage is horribly intrusive, as well. Still, I have to give the film points because Siodmak does put in Tupanico's mouth some valid complaints about the ways his people have been mistreated by the whites. Perhaps he had no political intent in this part of the script. Possibly, being a writer, Siodmak just wanted to supply motivation. Certainly the script as a whole tends to validate the hegemony of Europeans and Americans in South America, just as Rock's physical strength is validated over Andrea's moral strength. But at least, even if Siodmak's essential message is politically retrograde, I can appreciate that better than a film that doesn't really know what it wants to put across.

Posted by Gene Phillips at 4:13 PM
Email ThisBlogThis!Share to TwitterShare to FacebookShare to Pinterest
Labels: outre outfits (u), phantasmal figurations (u), the marvelous, the uncanny