SAMSON AND THE MIGHTY CHALLENGE (1964) 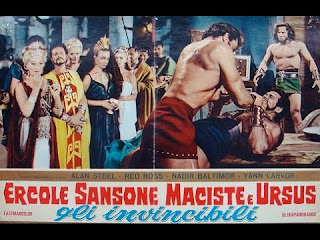 
Toward the tail-end of the Italian peplum craze, filmmakers began to team up the fabled heroes in the hope of pumping up their box-office returns. Until recently, I would have said that the best of these was 1963's HERCULES, SAMSON AND ULYSSES. However, the cheerful death-knell for the subgenre was most effectively sounded by this 1964 film. played for exuberant comedy.

The film begins with Hercules riding his steed up to a crossroads. At this point his heavenly father Zeus suddenly addresses the hero, telling him rather redundantly that he's at a crossroads-- though Zeus actually means a spiritual crossroads, since one road will lead Hercules to "virtue" and the other to "vice."  Though only lovers of mythic minutiae may appreciate this scene, it's a spoof of a Stoic story about Hercules choosing between virtue and vice, a visual trope that became popular in Renaissance art. The movie's Hercules promptly chooses vice, much to Zeus' frustration.

However, the all-father has his ways of getting even. Hercules happens upon a party of women-- Princess Omphale and her retinue-- swimming in the sea. Omphale gets tangled in a net and Hercules saves her from drowning-- at which point Zeus apparently takes a leaf from Aprhodite and causes his son to fall in love with this "virtuous" princess.  What Zeus fails to consider is that Omphale already has a mortal boyfriend, so that she scorns Hercules' attempts to court her.

The king and queen don't know quite what to do with the unwelcome suitor, but one of their slaves comes up with a brilliant idea: to set Hercules with a task he can't complete, and then deny his suit. Hercules promptly accomplishes the first couple of tasks with ease. Then someone gets the idea to force Hercules to fight the "strongest man in the world," and they further deceive Hercules by voicing the requirement as an oracle from the gods.  Hercules expresses confusion about being forced to fight himself, until it's explained that he's not technically a man, but a demigod-- and that the strongest mortal is actually the foreign-born Samson.  Hercules agrees to fight Samson before the court, so a contingent of courtiers is sent to fetch Samson.

Unfortunately, Samson is married to the possessive Delilah, who doesn't want him traveling to the big city and messing around with other women. She cuts a lock of his hair, and he loses his strength so that even she can shove him to the ground without much effort. The courtiers can't persuade the weakened Samson to come, so they enlist the brutish Ursus-- who isn't much like the noble fellow who had his own series-- to kidnap Samson. Another local hero, Maciste, objects to Ursus' bullying and defeats the brute. Eventually Samson is given a bribe to accompany the courtiers and "throw the fight" to Hercules.  Maciste and Ursus follow along for no particular reason. Eventually Samson's hair grows back-- though not before Hercules trounces him-- and the film concludes in a big battle royale between the four musclemen and the palace guards.

It's not often that I find an Italian slapstick film as funny as its makers think it is. But MIGHTY CHALLENGE, while no masterpiece, provides its share of light-hearted yocks.
Posted by Gene Phillips at 3:48 PM
Email ThisBlogThis!Share to TwitterShare to FacebookShare to Pinterest
Labels: combative comedies, the marvelous