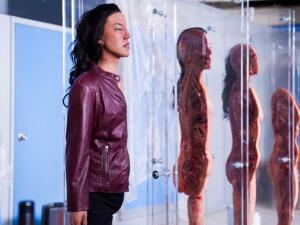 I've just run through the Season 2 DVD of HANNIBAL. As with my review of the previous set, I'm not going into a lot of fine detail here, since only a detailed survey of all three seasons could do any justice to the series as it stands now.  Some details, however--

As I've not read the Harris novels I'm not sure how much of the characters' dialogue stems from the original creator of "Hannibal the Cannibal." Harris may or may not evoke the pronouncements of the German philosopher Friedrich Nietzsche, but I assume at the very least the author framed his monstrous creation with a complete disbelief in God or any values attached to religion, even as did Nietzsche. I caught one direct reference to the German philosopher in Season 2's eighth episode, where Hannibal, at the time consulting for the FBI, draws a comparison to how prey-animals are made stronger by the predator's pursuits, calling a school of fish "Nietzschean" in that respect. Presumably this was a reference to the philosopher's aphorism, "That which does not kill us, makes us stronger." As Nietzsche references go, this one was just average, but I found myself much more impressed by a line Haniibal utters to Will Graham, the FBI consultant who's seeking to find proof of the psychiatrist's serial-killing habits:


While the "that which does not kill us" line has become so widely circulated as to almost become banal, Nietzsche's doctrine of "perspectivism:" that all human ideas are formed from particular perspectives, so that none of them is particularly valid except from said perspective. Hannibal doesn't just disbelieve in God; he disbelieves in any values save the ones he happens to hold. For instance, after being exposed to the "rudeness" of the character Mason Verger, who is paying Hannibal to give his sister therapy, Hannibal determines that Verger deserves to be eaten for this reason:

“Whenever feasible one should always try to eat the rude."


On another front, the writing of HANNIBAL remains as spare and disciplined as the work of Nietzsche himself in his mature, post-ZARATHUSTRA phase. Whenever such topics as "God" or 'good and evil" come up, Hannibal blithely disproves them as examples of poorly reasoned logic, just as Nietzsche insisted on the necessity of the "ubermensch" transforming himself to a state "beyond good and evil." Will Graham and his various allies are sometimes able to match Hannibal "pith for pith," so to speak, but they're never able to refute his sociopathic obsessions.

I'll add that this season, in addition to further deepening the main character's appealing madness, the scripters remain just as devoted to devising weird serial murders to be performed by either Hannibal or one of the other psychos who seem to be flocking to Minnesota. I'm particularly fascinated by the "bizarre crime" with which the second season opens: a killer's mural made of dead bodies, and arranged in a mandala-shape in emulation of similar designs in, of all things, Busby Berkeley films.

I can't help but draw a quick comparison to the teleseries LOST. Philosophical questions not infrequently arose on that series as well-- yet, partly because the series was so overloaded with characters and plot-threads, it failed to deliver a satisfying resolution in its final season. HANNIBAL is more narrow of focus, but arguably it achieves more by virtue of keeping to a more limited "perspective."

Posted by Gene Phillips at 3:48 PM
Email ThisBlogThis!Share to TwitterShare to FacebookShare to Pinterest
Labels: bizarre crimes and crimefighting (u), combative dramas, perilous psychos (u), the uncanny