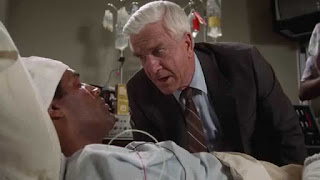 
I imagine that most fantasy-film concordances automatically leave out the NAKED GUN films for the same reason they would leave out the same filmmakers' AIRPLANE: because so many of the fantasy-triopes in all of the films are extra-diegetic. In one of my ARCHETYPAL ARCHIVE essays I wrote the following on AIRPLANE's "automatic pilot" joke:

I've mentioned that many comedy films toss out "impossible" occurences for the sake of humor, but that they are not "marvelous" because the impossible elements are not meant to be taken seriously.  An easy example of an unserious impossibility is the "automatic pilot" joke in AIRPLANE, who comes to life and smiles for a moment or two for the sake of a joke anyone reading this blog ought to know.


Dozens of jokes in the NAKED GUN series are of a similar nature, such as the famous scene in which Frank Drebin (Leslie Nielsen) tries to prevent his girlfriend (Priscilla Presley) from slapping him by grabbing both of her wrists-- only to somehow get slapped by a mysterious third hand. 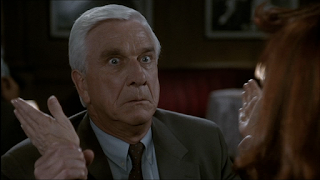 However, not all of the fantasy-elements in the GUN series are extra-diegetic, or, as I style them, "fallacious fragments" in the naturalistic mode. Only the third movie lacks any diegetic fantasy-elements and thus lines up as "naturalistic" alongside AIRPLANE.


The 1988 NAKED GUN, for instance, concerns how villainous Victor Ludwig (Ricardo Montalban) plots to kill off the Queen of England. Early in the film Ludwig demonstrates how he can transform an innocent maid into a programmed killer with a special hypnotic device (allegedly "borrowed" from the serious Charles Bronson film TELEFON). This sets up viewers for the comic suspense at the film's conclusion, when Drebin must ferret out the new killer at a baseball game-- who is none other than Reggie Jackson. 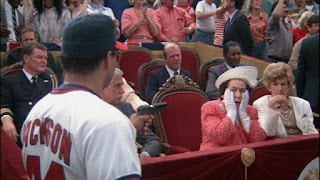 Thus, the NAKED GUN diegesis is marvelous, just as it is for 1962's ROAD TO HONG KONG, which *does* get mentioned in concordances for its SF-tropes-- even though it too sports all sorts of nonsense-non-sequiturs, like Hope and Crosby appealing to "wardrobe" to instantly change their costumes for them. 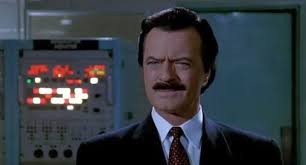 NAKED GUN 2 (life's too short to spell out the goofy title every time), however, has no SF-content. For most of the film, the plot of villain Quentin Hapsburg (Robert Goulet) involves only naturalistic resources, such as having a ringer impersonate the President's energy-advisor, so that Hapsburg and his energy-baron cronies can continue to control the country's destiny.  However, when goofball cop Drebin thwarts his plans, Hapsburg belatedly diverts the film into the uncanny domain, when he tries to blow up the energy conference with an "outre device" in the form of a small nuclear device. Such a device isn't the least bit marvelous, but it's as "uncanny" in the hands of an "anti-eco-terrorist" as it was in the hands of a gang of super-crooks in THUNDERBALL.

The final film in the Nielsen series took it back into the naturalistic phenomenality of the original 6-episode TV series POLICE SQUAD, where the only digressions from coherence and intelligibility are those the viewer isn't supposedly to regard as part of the diegesis. The opening gives an example of this by having Drebin and his squad take on a plethora of boogeymen... 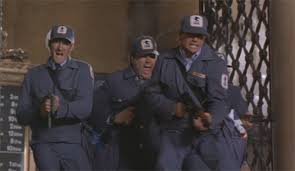 ...including "disgruntled postal workers," a joke which won't make any sense to anyone who didn't live through that particular era.

The main plot, though, is essentially naturalistic, even if it does involve a terrorist (Fred Ward) threatening to blow up the Academy Awards with a letter-shaped bomb.

As should be evident by now, I'm not reviewing the three films here except with respect to their phenomenalities. I like all of them to some extent, though none are as laugh-filled as AIRPLANE. Yet the GUN films fulfill the basic law of vaudeville: if you don't like one joke, wait a moment and you may like the next one coming right up.

In closing I'll note that I've seen some serial franchises that freely partook of all three phenomenalities whenever their authors so pleased, notably both the DICK TRACY comic strip and its various cinematic incarnations. But NAKED GUN may be the only franchise that had exactly three episodes, each of which fell squarely into one of the three phenomenalities.

Posted by Gene Phillips at 4:20 PM
Email ThisBlogThis!Share to TwitterShare to FacebookShare to Pinterest
Labels: combative comedies, delirious dreams and fallacious figments (n), diabolical devices (u), the marvelous, the naturalistic, the uncanny