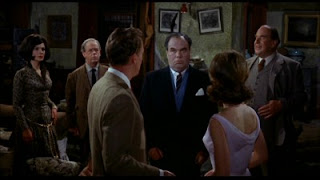 For a long time I disdained William Castle's 1963 remake of James Whale's same-titled film from 1932. It's true that director Castle and screenwriter Robert Dillon aren't in Whale's class as far as depicting weirdness and perversion, which is the main attraction of the original OLD DARK HOUSE. The focal characters in both films are the "Femm family,"a weird group of relatives living in a crumbling English mansion (Wales in 1932, Dartmoor in 1963). In Whale's hands the Femms are mad and potentially dangerous; in Castle's, most of them are a harmless bunch of English eccentrics. (I've no idea what they were like in J.B. Priestley's source-novel.)

Other changes abound. In the first film, a group of American travelers end up taking shelter from the elements at the Femm house. In the second film, there's just one American, Tom Penderel (played by Tom Poston in the second of two leading-man films he made with Castle in the early 1960s). Tom, rather than being a traveler, has been based in England for some time as a car salesman for an American company, and he's been rooming with an Englishman named Casper Femm. For reasons that are never entirely clear, Casper stage-manages things so that Tom ends up delivering a newly-purchased automobile to Femm House, little aware as what he's getting into.

Throughout his career Castle showed a penchant for gimmicky plots revolving around assassination, and so does this old HOUSE. Tom learns that the eccentric Femms are forced to live together by a bequest from their piratical ancestor, who predicted that they would have to stay together until the house was destroyed. In the 1932 film the house simply gets burned down. Since Femm House is built in a marshy area, one might wonder if Castle thought about giving the viewer some HOUSE OF USHER-like denouement. However,the prophecy turns out to be a no-show.

Tom unhappily discovers that in the time it took him to drive to Dartmoor, Casper Femm has been murdered and is lying in state in the mansion. Tom reluctantly agrees to stay the night, and the list of eccentricities is quickly reeled out: the eldest female in the family does a lot of knitting, another member thinks that the near-constant rain means that another Noah-level flood is on the way (he even builds an ark for the occasion), and Casper seems to come back to life-- except it's actually his twin brother, Jasper. The 1932 film had a ferocious, unspeaking butler named Morgan, but this time, Morgan's one of the family. He still doesn't speak (much) in this film, but he's constantly seeking to do Tom an injury for coming anywhere near his daughter Morgana. Morgana is one of two sexy young women-- the other, name of Cecilia-- whose charms encourage Tom to stick around. One of the Femms theorizes that Tom himself may be distantly related to the family based on a physical resemblance, and this is as close as one gets to an explanation for Casper's bringing Tom to this haunted house.

However, Tom soon learns that there are perils in being a Femm. His appearance for some reason sets off a killer within the brood; a killer who repeatedly knocks off other members of the family in order to clear the way to the inheritance. Nothing is said about why the killer waited until Tom's arrival to commit all these dirty deeds, or how the killer hoped to maintain the illusion of innocence once all the other inheritors were dead.  Tom, in typical American-slapstick style, is forced into the position of ferreting out and defeating the mystery murderer.

Though HOUSE isn't any sort of comic masterpiece, I found it blandly amusing on a recent re-watch. Perhaps once I abandoned any notion that the film was trying to be scary, or even creepy, the comedy was easier to take on its own silly terms. Poston is no Jerry Lewis, but he handles the slapstick reasonably well, and HOUSE is certainly better than the Castle-Dillon comedy-film released earlier the same year: 13 FRIGHTENED GIRLS.  About a year later Dillon scored much better with two beach-comedies for William Asher, but even in HOUSE one can see some of the forced antic-ness that dominated the Asher comedies. At one point, Tom gazes at a seal, one of the critters owned by the guy making his own ark-- and for some reason, Tom imagines the face of seductive Morgana superimposed on the head of the seal. I think the weirdness of that association beats out all of the fictional eccentricities of this particular Femm family.

Posted by Gene Phillips at 11:49 AM
Email ThisBlogThis!Share to TwitterShare to FacebookShare to Pinterest
Labels: the uncanny, weird families and societies (u)