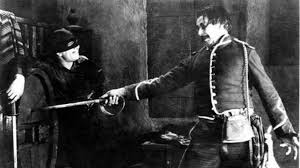 
Zorro, who first appeared in a magazine serial by Johnston McCulley in 1919, seems to have been one of cinema's most durable "quasi-superheroes," rivaled only by Tarzan. While most costumed adventurers-- Batman, the Green Hornet, the Shadow, the Spider-- were confined to juvenile film serials, Zorro and Tarzan were apparently characters that adults could enjoy to some extent. That's not to deny that both characters did appear in serials, as well in cheap B-film vehicles. But you didn't see Batman or the Shadow get considered for even one A-level film.

The silent MARK OF ZORRO appeared the year after the magazine serial. with Zorro's adventure performed-- and scripted-- by Douglas Fairbanks Sr. Because the film became popular, it's alleged that when author McCulley wrote his Zorro sequels, he borrowed bits of film business, like Zorro's signature use of the "Z" carved with his sword.  Fairbanks only did one sequel, and for one reason or another Hollywood tended to remake the original rather than chronicling the swashbuckling hero's continuing adventures, as they did with Tarzan from the silent era onward. (Alternately, they frequently tossed out new versions of Zorro who were descendants of the original, as seen in ZORRO'S FIGHTING LEGION-- but none of these latter-day avatars enjoyed a second outing.)

MARK OF ZORRO was in one sense Fairbanks' successful attempt to "re-brand" himself, for many of his previous cinematic efforts had been comedies, though I assume a performer of Fairbanks' athleticism had used stunt-work before launching himself as an adventure-hero. Other such high-energy films followed ZORRO, not least 1921's THREE MUSKETEERS and 1924's THIEF OF BAGDAD, but ZORRO set the standard for Hollywood swashbucklers, and arguably upped the ante for all films of an adventurous mode.

Like the novel, ZORRO is a simple story of revolutionary heroism: Don Diego de la Vega. a caballero, has been for years absent from his father's home in Los Angeles during the Spanish colonial period. He returns, and presents himself to all as an educated fop who could not care less about the abuses of the Spanish government. As such, he's laughed at by cruel soldiers like Sergeant Gonzalez, and scorned by the haughty local beauty Lolita. But when he dons the mask and black outfit of Zorro, he becomes a crusader against evil-- and to be sure, even though this is a mostly bloodless film, viewers will behold some cruel whippings that inevitably cause them to side with the rebel hero against the corrupt but legal authorities.

That said, Fairbanks puts a great deal of humor in the film, particularly at the opening, when Gonzalez boasts to all the listeners in a bar about what he'd like to do to Zorro. Naturally,the masked hero promptly shows up to give him his chance, and of course thrashes the buffoon handily.  Scenes like this one still resonate today, and comics-readers will note how often Jerry Siegel wrote his early SUPERMAN stories to project the same sort of daredevil insouciance.

One interesting note is that the question of aristocratic "blood" is raised three or four times, particularly when Zorro breaks into a party of aristocrats. He condemns them as "idlers," "wasters," and "fashion-plates" for tolerating rampant injustice given that they possess "the blood of Aragon"-- while adding that, "I pledge you, my blood's as noble as the best!" From what I remember of the novel, this seems to be in accord with one of the ideals of Zorro; that of noblesse oblige. DON Q SON OF ZORRO was based on a historical novel that had nothing to do with Zorro or any masked adventurer. Keeping with the idea that at the end of the first film Zorro revealed his true identity to the public, the producers may have decided that this revelation ended any possible use of the original hero. But even though Diego married, he could still give rise to a new hero-- though Cesar de la Vega (played by Fairbanks) never dons Zorro-like garb, as some viewers might expect. The action takes place entirely in Spain, as Cesar seeks the hand of a lovely young lady. Another suitor covets the same woman, and so frames Cesar for murder. Though Cesar is as athletic as his daddy, and sports skill with a whip, the closest he comes to Zorro-like action is that he fakes his death and persecutes some of his enemies as a mysterious presence, until it becomes known that he's still alive. The film was quite popular in its time, and shows some technical improvements over the earlier work. However, it lacks the fevered romanticism of the original, and although Fairbanks was only five years older, he doesn't succeed in infusing Cesar with as much charisma as either Zorro, or most of the actor's better known heroes. The only thing that qualifies this as a metaphenomenal film is that toward the end, Daddy Zorro journeys to Spain and, assuming his black costume once more, helps his son fight a bunch of soldiers. 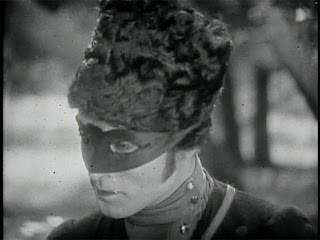 Rudolf Valentino enjoyed his ascension during the same period as Fairbanks, but his best known roles are entirely naturalistic in tone and content. Until I watched THE EAGLE, I had no idea that it even contained-- albeit only for a few minutes-- a sequence with a Zorro-like masked hero. The story was adapted from an unfinished Pushkin novel about a noble Cossack soldier named Vladimir, who is forced to flee the service when the Czarina Catherine came on to him. In the film Vladimir assumes the masked identity of "the Black Eagle" to keep from endangering his family while he and his fellows battle the authorities. Since it's said this identity was not in Pushkin, it's almost certain that it was an addition made by the producers to give it a little Zorro-flavor-- possibly in anticipation of the year's new ZORRO-related film.

THE EAGLE is not a swashbuckler at all, having very few action-sequences. Like the best-known Valentino films, it's first and foremost a romance, about Vladimir trying to find happiness with Mashka, who happens to be the daughter of an evil nobleman. Vladimir manages to infiltrate the nobleman's household under an assumed identity, which leads to the film's most psychologically interesting scenes: Mashka being torn between her love for Vladimir and her reluctance to see her father punished for his misdeeds. In the end Vladimir and Mashka are allowed to find happiness, but there's no climactic battle at the end. Therefore, although the presence of the masked crusader does mark THE EAGLE as a "marginally metaphenomenal" film, it's not even marginally combative, unlike the previous two films cited here.