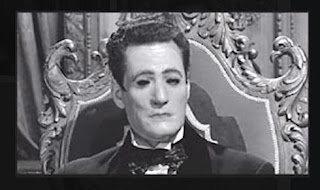 
One of the best things about William Castle's adaptation of the Ray Russell source-novella-- aside from Castle's hiring Russell himself to write the screenplay-- is that he Castle chose to separate his own puckish, would-be-Hitchcock humor from the story proper. The two horror films Castle released directly before SARDONICUS-- 13 GHOSTS (1960) and HOMICIDAL (1961)-- have their merits, yet both seem stitched together out of disparate set-pieces. It's as if Castle, in trying to imitate Hitchcock's gallows-humor, came up with something closer to the concept of "camp"-- which Susan Sontag hadn't yet written about, though her famous 1964 essay claimed that the sensibility had been "in the air" since the 18th century.

Even though the "monster" of SARDONICUS is a man who can't stop smiling, the main body of the story, set in Europe in the late 1800s, is given a sober and dramatically centered treatment, in keeping with the Russell novella. The main source of humor is extra-diegetical, as Castle himself interrupts the story in his persona as the modern-day director. He does this twice. First, he appears at the film's outset, to stoke the audience's anticipations of the weird tale to come. His second appearance comes near the conclusion, where he invites the audience to vote in a "punishment poll" that would supposedly determine, at each theatrical showing of the film, whether the theater showed a version that punished Sardonicus or tendered him mercy.  Given that I haven't often liked Castle's sense of humor within other horror films, this sequestration suited me just fine.

The original novella and the film adaptation are very much framed by Freudian notions of traumatic obsession. We're introduced to Cargrave, a British doctor. He excels in the treatment of trauma, and is seen healing a young girl via his techniques. He might be seen as a positive inversion of the maker of horror stories, for instead of creating nightmares that haunt audiences, Cargrave frees his patients from irrational fears and promotes healing.

Cargrave gets a note from a former lady-love, Maude. Some time ago she married another man, whom Cargrave never met, and took up residence in his baronial estate in the fictional Middle-European land of Gorslava. Maude implores Cargrave to come to her assistance, so he's immediately off to Gorslava. In keeping with many of the Gothics from the actual 1800s, the estate is ruled over by the heavy hand of its master, Baron Sardonicus, whose tyrannies are administered through his one-eyed right-hand man, Krull. At dinner Cargrave meets Sardonicus, who initially hides his face behind a mask. Sardonicus ordered Maude to write Cargrave because the Baron wants to be healed of his affliction: his face frozen into a grinning rictus, not unlike that of Victor Hugo's THE MAN WHO LAUGHS.

Hugo's smiling monster was created by crude surgery, but Sardonicus-- who has taken his name from his affliction-- had his condition brought on by psychological trauma. He, his wife and his father once lived in poverty. Shortly after the death of Sardonicus' father, he and his wife learn that the deceased was buried with a valuable lottery ticket that could solve all their penury problems. The wife, like a lesser Lady Macbeth, eggs on Sardonicus not to kill a father-figure, but just to violate the peace of his grave. Sardonicus doesn't need much urging, but he's no less cursed than Macbeth for his trespass: his face assumes the frozen grin of his dead parent.

Castle's film doesn't cavil so much at this offense as at the things the cursed Baron does with his money: torturing servants with homemade experiments, and possibly killing a few local ladies just for amusement. And when Cargrave doesn't want to employ untried techniques on Sardonicus' condition, the Baron threatens to have his wife disfigured to force the doctor's hand. (Here Castle and Russell ratchet up the Baron's fiendishness somewhat from the novella, where Sardonicus simply threatens to have congress with the woman who has only been his wife "in name only.")  Cargrave appears to both give in to the Baron's demands and to cure him, which wins freedom for both himself and Maude. However, the Baron's own sense of sinfulness pursues him even after he's been cured of the grin-malady. Freudian guilt-repression results in a new flowering of the same trauma, and brings an end to the career of Sardonicus.

Though I wasn't able to lay my hands on a copy of Russell's novella, it's my memory that the original Sardonicus had much more of a conflict with his father before the old man died. In the film the father of the future Sardonicus is a pretty jolly old fellow, so there's not as much resonance as in the original story's Freud-influenced paradigm, where the act of opening the grave is inherently a show of hostility to the dead man. Still, this slight alteration of the villain's psychology doesn't make him any less nasty. The facial appliance used to give the Baron his grin of death isn't overly convincing-- actually, I even preferred the one seen in the 1942 SMILING GHOST.  Actor Guy Rolfe can't really talk through the appliance, so for the most part he utters his on-camera lines when he's wearing the mask. Still, it's one of the few times an actor was able to create such a memorable character using only voice and body-language.

A minor note: I don't include this film under my trope-designation "perilous psychos" because I see no evidence that Sardonicus is truly insane; merely that he's both afflicted and cruel as a result.

ADDENDUM: I've now laid hands on a copy of the original Russell novella, and I have some corrections. Although I still think that there's a "Freud-influenced paradigm" in the situation of Sardonicus being "cursed" by his father's death-grin, it doesn't come about because the young monster, name of Marek, had an overt conflict with his father. The father described in Sardonicus' flashback is still a jolly old fellow whose one vice is his continuous purchase of lottery tickets, and the only hostility Marek feels is toward the custom that the oldest son gets the lion's share of the bequest:

"The good man had left few possessions, but these few were divided, according to his written wish, among his survivors, with the largest share going, of course, to the eldest son."

A little later it's evident that Marek feels the most acute resentment. When the family realizes the old man's been buried with a winning ticket, the mother refuses to let the sons dig him up. Marek pretends to agree with her, tricks her into letting him guard the grave against trespassers, and then proceeds to dig it up himself.

Also, I've changed my mind about Sardonicus being a "perilous psycho"-- not because the things he does to others are the result of madness, but because madness informs what his traumatized mind does to his own body-- a situation that compares slightly with that of the protagonist in 2010's BLACK SWAN.

Posted by Gene Phillips at 3:19 PM
Email ThisBlogThis!Share to TwitterShare to FacebookShare to Pinterest
Labels: bizarre crimes and crimefighting (u), freakish flesh (u), perilous psychos (u), the uncanny