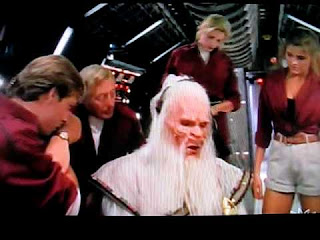 I dimly remembered this TV-movie-- actually two hour-long pilots for a series that didn't get picked up-- as being mildly entertaining in a cheesy fashion. I re-watched largely to see whether or not it cohered with my definition of a combative adventure, which it did not.

The screenplay has less in common with the Jules Verne novel-- wherein a  trio of explorers venture down into the earth's bowels on foot-- than with Edgar Rice Burroughs' AT THE EARTH'S CORE. This telefilm like the Burroughs novel concerns a group of explorers who uses a drill-headed vehicle to tunnel their way into the earth. But whereas Burroughs made do with two adventurers, the crew includes no less than seven persons gifted with either scientific or survival skills, plus a computer intelligence with a holographic image. Presumably the producer wanted to be sure of having a wealth of potential backstories to explore as the crew went from week to week, encountering this or that buried civilization (another point of similarity with the Burroughs franchise, since Verne's book is ambiguous as to whether any tribe of humans, or even proto-humans, dwells beneath the earth's surface).

On top of the seven people who begin the journey-- eight if the female computer-mind would've become a participating character-- the explorers also pick up a new member, a Yeti (Carel Strucken) exiled from his culture for the crime of having saved a child's life (sort of an extreme caricature of a non-intervention ethic). In the film's only near-miss with mythology, one of the scientists suggests that since they can't pronounce the Yeti's name in his own language, they ought to nickname the furry titan "Daedalus," after the Greek maker of a labyrinth. The resident Angry Black Guy doesn't like such high-toned cognomens and promptly renames the Yeti "Dallas"-- which I hope contributed to the decision not to launch this idea as a series.

Once the plot gets past an extraordinarily poky intro section and actually begins the subterranean voyage, JOURNEY has enough pretty and/or seasoned actors to be watchable. The explorers' main opponents are a subterranean tribe of troglodytes bent on human sacrifice, though there's some additional folderol about a magic book possessed by one of the scientists, and a strange subterranean individual who sounds and looks like Darth Vader and covets the book. Despite the potential for violent conflict, the plot avoids any substantial action, although there's a very strange sequence in which Vader 2.0 jumps on top of the drill-ship and tries to force his way in.

JOURNEY is at least colorful in its silliness, though like most of director William Dear's productions it's strictly journeyman work. And even though there are plotlines that will never be resolved, even by the most fanatical fanfic writer, at least this flop pilot doesn't end on an annoying cliffhanger.
Posted by Gene Phillips at 7:18 PM
Email ThisBlogThis!Share to TwitterShare to FacebookShare to Pinterest
Labels: subcombative adventures, the marvelous