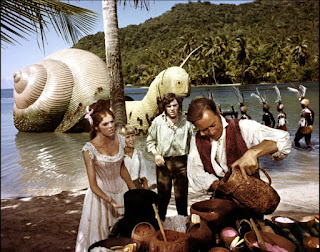 I consider both this film and the 1998 Eddie Murphy vehicle to be comedies, but of a very different type. The Murphy film relies on very broad slapstick and scatological gags, while the dominant tone of the 1967 movie is more about wry and wistful humor.

As I've never read any of the Hugh Lofting books that gave birth to the Dolittle character, I can't speak to the tone of the books, or to the allegation that they are steeped in a racist and pro-colonial attitude typical of the early 20th century. I mention the allegation only to point out that the script by Leslie Bricusse-- also credited with the film's musical composition-- bends over backwards to dispel that legacy.

In its time DOLITTLE was a box-office disappointment. It's far from the worst of the flurry of large-scale Hollywood musicals of the late 1960s, but it's certainly too long and most of the songs rely on doggerel-style rhymes and prove generally forgettable, with the exceptions of the Oscar-nominated "If I Could Talk to the Animals" (recited, rather than sung, by star Rex Harrison) and "Beautiful Things" (nicely rendered by Anthony Newley).

The strength of Bricusse's script is that it touches on the idea of "animal rights" without being overly preachy. Dolittle is an English physician who's fallen on hard times because he likes animals better than people, and even wins the approval of his Irish aide Matthew, who says that Dolittle is "almost an Irishman"-- certainly a considerable compliment to be paid to an Englishman. Dolittle's home is overrun with countless animals, but the one that makes a difference in his life is the parrot Polynesia, who claims to be the only parrot who "knows what he's talking about." Polynesia knows all the languages of the animal world and proceeds to teach them all to Dolittle, who wants to use them in his goal to seek out strange animals throughout the world-- notably the Giant Pink Sea Snail.

In addition to Matthew and a little boy named Tommy, Dolittle receives an ambivalent ally in Emma Fairfax, high-class niece to one of the doctor's veterinary customers. Sparks fly between Emma and Dolittle, but despite the initial animosity, Emma begins going out of her way to encounter Dolittle, and takes his part when the local authorities deem him mad for talking to animals. Dolittle, Matthew and Tommy leave England in search of the Great Sea Snail, and Emma stows away on their ship. Though Emma isn't a deeply rendered character, and her femininity is treated jokily in the song "If I Were a Man,"she does prove herself to be a hard-working member of the crew, and Dolittle's misanthropy gives way to warmer feelings.

A storm results in the voyagers finding their way to Sea Star Island, inhabited by black natives who all speak English (and other languages) and whose leader takes the name "William Shakespeare" (Geoffrey Holder). I suspect the books' natives are not quite so locqacious. But even if some ideologues wouldn't care for having the natives appropriate Western culture, the tribe doesn't come off badly, even when they're preparing to kill the Dolittle entourage for breaking their very complicated laws.

The conclusion is fairly predictable, and is particularly marred by a phony-looking Giant Sea Snail. But some of the dialogue is witty, and the end-scene, showing Dolittle astride a giant lunar moth, captures some of the whimsy that other sections of the film strain for.
Posted by Gene Phillips at 2:48 PM
Email ThisBlogThis!Share to TwitterShare to FacebookShare to Pinterest
Labels: the marvelous