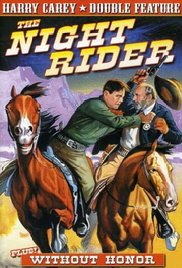 I imagine I'll get burnt out sooner or later, trying to sort through the legions of B-westerns for metaphenomenal content, but at least Harry Carey's THE NIGHT RIDER is a slightly better example of the breed.

In this review I looked at two films-- the 1936 PHANTOM OF THE RANGE and its 1939 remake-- which just barely passed over the threshold from the naturalistic to the uncanny. In both films the only metaphenomenal presence was an outlaw-gang's stooge wearing dark clothes and pretending to be a ghost.

The titular Night Rider doesn't pretend to be a ghost; he's just a bandit who dresses all in black and seems able to disappear from sight when posses go after him (we later learn that he has recourse to a secret passage leading down into an abandoned mine). No one in the local town can catch the Rider, so along comes John Brown (Carey), apparently some sort of traveling marshal. However, to conceal his identity, Brown masquerades as Jim Blake, an outlaw whom he Brown has recently captured. While nosing around, Brown also teams up with two comedy-relief sidekicks, played by Gabby Hayes and Julian Rivero, both of whom, like Harry Carey, were pushing sixty at the time of the film. The three have good chemistry and Rivero's character, though he is a comic type of Mexican, isn't a racist stereotype.

The Night Rider doesn't appear in costume for very long in the film, but in contrast to the dark-clad stooge of the earlier-cited films, he does create the aura of a formidable menace. One might consider him the moral obverse of the black-clad Durango Kid, whose films I've discussed elsewhere.
Eventually Brown exposes the Rider as the embittered brother of a pretty young female rancher, but the fact that Brown puts her brother away doesn't seem to cause her much concern as she makes up to him at the end-- any more than the fact that Brown's about forty years her senior.

No director-credits appear, but IMDB cites two collaborating talents: Fred C. Newmeyer, best known to fantasy-fans for the 1929 SEVEN KEYS TO BALDPATE, and William Nigh, who labored on such low-budget horror-flicks as Boris Karloff's THE APE and Bela Lugosi's BLACK DRAGONS. Though RIDER sports very modest production values, Newmeyer and Nigh manage to give some of the scenes-- particularly the opening set-up in the local saloon-- a little more verisimilitude than one usually sees in B-westerns.

Posted by Gene Phillips at 1:45 PM
Email ThisBlogThis!Share to TwitterShare to FacebookShare to Pinterest
Labels: combative adventures, outre outfits (u), the uncanny