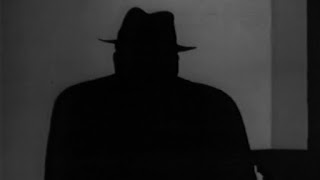 
Though the masked American hero of the same name had appeared a couple of years previous, this British crime-thriller bears no relation to the pulp-character. The titular Shadow is a blackmailer who's causing havoc among the British upper classes with his activities. The story conforms to all the usual "old dark house" tropes as the masked malefactor stalks victims at a country-house.

In terms of metaphenomenal pleasures, at least the director does have the guy in the dark suit lurking at windows to cause the occasional scare (and one good joke at the expense of a scared old woman, which I assume appeared in the original play). The script is talky and the pace is generally slow, but star Henry Kendall livens up some scenes by essaying a typical upper-class twit. Otherwise it's entirely forgettable. 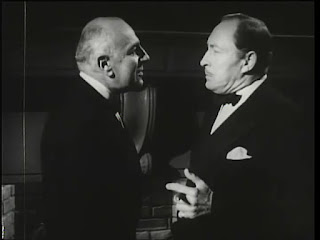 FOG ISLAND was also based on a now-forgotten theater melodrama, but for American viewers it carries some cachet, thanks to the presence of George Zucco and Lionel Atwill. The two actors, who had shared credits (but not scenes) in the previous year's HOUSE OF FRANKENSTEIN, are today best known for their work in horror movies. It's likely that both actors were cast with that experience in mind, even though FOG ISLAND is, like THE SHADOW, more of a crime-thriller than a horror flick.

Leo Grainer (Zucco) is the focus of the story. After suffering an unjust term in prison because of the malfeasance of his business partners, he comes up with a scheme to lure those partners to his island-domicile. He baits his trap with filthy lucre, and the greed of the partners is such that they obediently show up on Fog Island despite knowing that Grainer bears them ill will. Only one of the attendees is an innocent-- a young fellow named Jeff, who appears in the place of his deceased father, and who has nothing to do with Grainer's sufferings. He comes not for money but to renew his acquaintance with Grainer's pretty stepdaughter Gail.

Much of the proceedings here are pretty slow as well, but there's a good face-off between Zucco and his unrepentant enemy Atwill. The film's set-piece is an "outre device" in the form of a water-filling room in which Grainer traps his enemies: this is also the source of the film's only "bizarre crime" as well. I'll note in closing that whereas Jeff is written to be a pretty standard "bland handsome fellow," actor John Whitney emotes pretty well when he's forced to conceal the fact of the mass murders from  Gail in order to spare her feelings.

Posted by Gene Phillips at 3:45 PM
Email ThisBlogThis!Share to TwitterShare to FacebookShare to Pinterest
Labels: bizarre crimes (u), diabolical devices (u), outre outfits (u), the uncanny