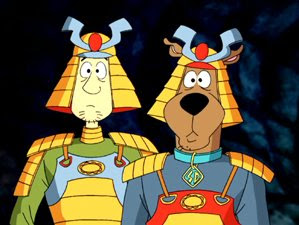 
SCOOBY DOO AND THE SAMURAI SWORD wasn't much funnier than most of the DTV Scooby-movies out there, though it did make me laugh out loud at one point.. Yet it does boast a script that's more intelligent than the average.

The subject matter of the story may have encouraged the scripters to devote a little more research than usual. Scooby and the gang find their way to modern Japan, whose culture, according to one character, is perpetually conflicted between ancient ways and modern post-technological civilization. Perhaps because the popular culture of Japan has become entwined with that of America, the Scooby Gang don't encounter some fake-ified version of the country's myths and legends, but a bonafide supernatural menace called the Black Samurai. (To be sure, there are a bunch of robotic ninjas flying about, controlled by a secondary adversary whose identity must be revealed by the usual penny-ante sleuthing). The samurai, a medieval warrior possessed by the spirit of an evil sword, is loosely tied to the authentic Japanese legend of the swordsmiths Masamune and Muramase.

One welcome variation on the regular Scooby hijinks is that the character Daphne has much more to do this time, as she's the main reason for the Japanese sojourn. SWORD's version of Daphne seems to have been conceived in line with the "Kung Fu Daphne"  seen in the 2002 live-action Scooby-film, though to my knowledge this DTV is one of the few to do so. Daphne has a nice martial-arts match with a fellow female student, which event Shaggy calls knowingly a "kung fu catfight." (I wonder what any little kids watching the DVD made of that phrase.)

Aside from the spectacle of Daphne in a karate-gi, the film is at its most interesting when Scooby and Shaggy must both train with a Japanese mentor to become samurai capable of defeating the undead swordsman, using a "good sword" that destroys the Black Samurai's "bad sword." This sterling accomplishment by the two goofballs is only possible because both Shaggy and Scooby can easily reach the Zen state of "no mind"-- because neither of them has any mind to speak of. (The joke at which I laughed ties into this sequence, spoofing the schtick of the mystic master who can counsel his disciple through telepathic contact.)

For the purpose of my combative theory, SAMURAI SWORD is another illustration of a variation I described in my ARCHIVE essays like this one. Although Scooby and Shaggy are the means by which the evil demon is defeated, the "good sword" is guided not by their talents by the power of the sword's guardian dragon. In addition, I thought it was implied that all of their skills acquired by Shaggy and Scooby were more or less bestowed upon them by their samurai-mentor's "crash course" and that any and any of those martial skills would go bye-bye when the Scooby Gang had its next outing.. For this reason I don't regard SAMURAI SCHOOL as a film with a full combative value.

Posted by Gene Phillips at 12:29 PM
Email ThisBlogThis!Share to TwitterShare to FacebookShare to Pinterest
Labels: the marvelous