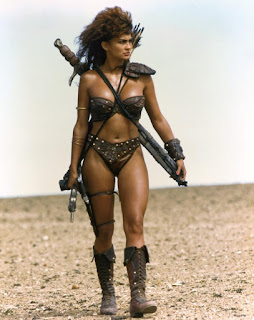 I've never read any of John Norman's GOR novels, which I've heard described as "John Carter with bondage-and-discipline" elements. In the films these fetish-elements are confined to a few lines of dialogue, so these two bland barbarian fantasies-- presumably shot back-to-back like many productions of the time-- probably have much more in common with Edgar Rice Burroughs mildly sexy adventures than with Norman's GOR books or anything more venturesome.

To be sure, the two films do put a lot of female flesh on display-- much more than the Disney adaptation of the first John Carter book-- and for fans of feminine objectification, this is pretty much all the films have to offer. The above still of B-movie actress Rebecca Ferrati ably represents the generally buxom look of most of the women on display- though to be sure, this struck me as a little odd. After all, one of the producers on both films (as well as a scripter, writing under a pseudonym) was Harry Alan Towers. It's not that Towers' productions-- of which the Fu Manchu film-series remains his best known work-- don't sell themselves with a lot of attractive females. But most of the Towers films I've seen favor more svelte depictions of feminine charms. The GOR movies put me more in mind of the Italian sword-and-sandal flicks, in which casting directors generally tend to skew toward the Grand Tetons.

Plotwise both films also follow the general example of the peplum films rather than other barbarian epics. GOR begins by focusing on a Clark Kent-ish college professor, Tarl Cabot, who possesses a mystic ring that he thinks has the power to transport people to the "counter-Earth" Gor, though he's apparently going on hearsay from his father, who passed it down to Tarl in some vague manner. Tarl seems bullish on the idea of extraterrestial teleportation for someone who's never actually experienced it, and he's such a nerd about it that his girlfriend deserts him for a more manly rival.

Then, for no particular reason, the ring suddenly works, teleporting Tarl to the world of Gor, where everyone runs around the desert in skimpy costumes and no one, except maybe some priests, has access to advanced technology. Tarl gets mixed up in a village-raid led by the tyrant Sarm (Oliver Reed paying his bills). While defending himself Tarl, though not a fighter, kills Sarm's son, thus getting the tyrant cheesed off at the Earthman. Fortunately for him, though he's got no fighting-mojo at all, the tough barbarian girl Talena (Ferrati) takes a liking to him and inducts him into her anti-Sarm forces. Both the Earthman and the tyrant are after a special gem called the "Homestone," which Tarl can use to return home. Why Sarm wants it seems more obscure, but his motives more or less get lost in a lot of aimless quests to various desert locales, and even the matter of his avenging his son is pretty much forgotten. Eventually, following the lead of many a peplum, Tarl and his rebels overthrow Sarm. And just as Tarl has become more interested in hanging around with Talena, his magic ring activates and flings him back to Earth.

GOR and its sequel are much more padded than the better sword-and-sandal flicks, and their appeal is hurt by the fact that the main hero, as essayed by Urbano Barberini, is one of the most listless barbarian-heroes out there. Frankly, I wish the films had starred Ferrati, who projects a feral savagery in addition to just looking good. In contrast to the sequel, GOR has more familiar faces-- Paul L. Smith of POPEYE fame and Arnold Vosloo, who had yet to score with the MUMMY films.

However, if I had to choose between the two dopey flicks, I would say that OUTLAW OF GOR has a minor psychological trope that puts it above the former film's aimless wanderings. Toward the end of the first flick we meet an evil priest named Xenos (Jack Palance), and in the second film we learn that he's putting the moves on the throne of Gor, or at least some realm of Gor. Xenos arranges a marriage between Marlenus, elderly father of Talena, and a hot young thing named Lara (Donna Denton). Because Marlenus chooses to let Tarl succeed to the throne after the latter marries Talena, Xenos and Lara conspire to kill Marlenus and set up Tarl for the crime. Oh, and this time when Tarl comes back, he brings along another Earthman, a wimpy comedy-relief character named Watney, who may be one of the most useless comedy-reliefs ever created. For some reason hot Lara seduces Watney, apparently to use him in her schemes, then forgets whatever scheme she had in mind and imprisons him as well.

Tarl's subsequent adventures are just as disorganized as they were in the first film, but this time the villains have more potential to generate good hate, like the best of the peplum-evildoers. Unfortunately, Xenos soon takes a back seat to Lara, and Donna Denton doesn't make even a good road-company evil queen. Most peplum take a roughly Oedipal route-- young hero is caught between a babe his own age and a somewhat older evil queen-- so I like the fact that there's a potential "Electra complex" here: young woman marries the elderly father of the hero's equally young girlfriend, kills the old guy, and then tries to put the moves on Talena's stud. But Denton and Barberini are equally incompetent at projecting their respective villain/hero roles-- thus giving me yet another reason to wish that they'd thrown out the Tarl Cabot character and focused on Talena from the start.

Posted by Gene Phillips at 2:04 PM
Email ThisBlogThis!Share to TwitterShare to FacebookShare to Pinterest
Labels: combative adventures, the marvelous