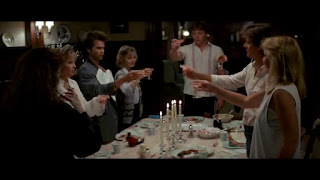 Starting with the most obvious spoiler-- that, like the title says, the film's main plot is One Big Prank, both on the majority of characters in the story and on any viewers who don't see the Big Reveal coming.

Director Fred Walton had only one previous entry in the world of metaphenomenal films: 1979's WHEN A STRANGER CALLS. Walton had done a short film, THE SITTER, in 1977, and upon seeing HALLOWEEN reap big bucks in 1978, he expanded his short into a full-fledged film, which also enjoyed considerable success, and is probably one of the better-known titles from the late 1970s-mid 1980s period. However, for whatever reasons he did not become "typed" by the genre like many other horror-directors. Aside from a TV-sequel to CALLS, APRIL FOOL'S DAY is his only real foray into "slasher-horror." (He did also direct a couple of TV-films with somewhat horrific themes, but not "pure horror," slasher-related or not.)

Since APRIL appeared in theaters when the slashers were on the downswing, it's easy to imagine Walton pitching the film as an extended joke on the subgenre, though the film is still serious enough to rate as a drama, rather than being a comedy like 1981's STUDENT BODIES. In many ways, APRIL seems to follow the mode of hoax-thrillers like SEVEN KEYS TO  BALDPATE, particularly since BALDPATE and APRIL, unlike the great majority of "phantasmal figuration" films, both deal with hoaxes that are NOT informed by any criminal purposes.

Because the plot is to an extent a rewritten "Ten Little Indians" scenario, APRIL places a group of college-age students in a ritzy setting: the island-estate of rich girl Muffy St. John. Even before the students arrive at their destination, one of their number seems to fall victim to a disastrous accident, and is taken away to a hospital. Though the accident throws a temporary pall upon the students' desire to party, they manage to put the unfortunate victim out of their minds and to return to a semblance to normalcy. Then other "accidents" transpire. Is someone out to get everyone on the island, but without bothering to issue a "ten little indians" challenge? Could it be the little-known "Buffy," insane twin sister of Muffy?

Even though it will eventually be revealed that all the deaths and maimings are illusions, Walton and his crew do a good job of keeping up the mysterioso effects necessary for an uncanny film. The weakest aspect of the film is that Muffy, the instigator of the hoax, never really puts across the illusion of Buffy for the film-viewers, even though the stranded students take it seriously enough. As in many slashers, the characters are broad stereotypes. However, in some scenes the script does succeed in putting across the uncertainties in the lives of these prospective adults, and thus links up with 1981's PROM NIGHT and other slashers involving young people on the cusp of adulthood. The scattered scenes about the uncertainties of adult life are the main reason I term this a sociological myth.

I noted in this essay that 1935's MARK OF THE VAMPIRE is about two illusory vampires, who are "created" by a law enforcement figure to smoke out a real villain. In the same sense, it might be said that "Buffy St. John" is the illusion at the heart of APRIL's foolery, even though Walton doesn't succeed in making "her" as compelling as VAMPIRE's fake monsters.
Posted by Gene Phillips at 4:03 PM
Email ThisBlogThis!Share to TwitterShare to FacebookShare to Pinterest
Labels: phantasmal figurations (u), the uncanny