SHERLOCK HOLMES AND THE SECRET WEAPON (1943) 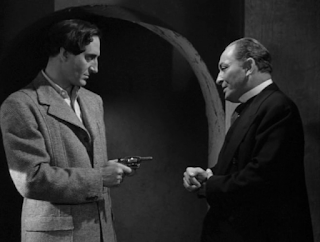 The title of this WWII-era adventure might suggest that the Great Detective may get involved with some radical new device, of the sort that belongs to my "outre" category. However, Holmes is involved in protecting an effective but thoroughly mundane aerial bombsight-- and its inventor-- from being acquired by Nazi agents.

Though Holmes succeeds in smuggling inventor Tobel out of Switzerland and into war-torn England, the Nazis are in pursuit. Tobel, rather than immediately giving his invention to the Brits, procrastinates while waiting to contact his fiancee. This allows the Nazis time to capture Tobel. The fiancee then reveals that during his time in Switzerland Tobel sought to pass on his invention to other scientists, but only in four separate segments, so that the Nazis could not easily track down the plans. The fiancee has a code that explains who has what section of the plans, and this code-- based on one used in Doyle's 1903 story "Adventure of the Dancing Men"-- is one that Holmes must try to decipher, to gain custody of the segments. However, the Nazis also get a copy of the code and make their own attempt to trace the scientists, even while torturing Tobel for information.

The dodgy plot is really just an excuse for (1) morale-boosting about England's continued resistance during WWII, and (2) yet another encounter between Holmes and his best-hated foe, Professor Moriarty. This time Lionel Atwill essays the role, and although Atwill had been playing cads and bounders for some time by 1943, he seems especially well suited to play the master villain who proves most able to confound Britain's master detective. Indeed, although there's nothing special about the sociological aspects of WEAPON, the psychological opposition between upright Holmes and the thoroughly immoral Moriarty provides the film's best moments.

Moriarty and his agents only utilize mundane means in their espionage, up until the point when the villain has Holmes in his power. Holmes then mocks the evildoer's paucity of imagination, claiming that he Holmes could think up a more imaginative way to kill someone. Thus, in a rare turnabout, the bizarre crime performed by the criminal-- that of slowing draining the hero of his blood as a means of execution-- is actually conceived by the hero! Holmes only does so to gain time, of course, and the stratagem works. Moriarty is killed (again), the bombsight and its inventor are saved, and Britain is one step closer to the presumed victory. Rathbone is good as always, though I didn't think his disguises were very convincing. Nigel Bruce and Dennis Hoey perform ably but don't have any outstanding scenes.
Posted by Gene Phillips at 4:34 PM
Email ThisBlogThis!Share to TwitterShare to FacebookShare to Pinterest
Labels: bizarre crimes (u), the uncanny