The 1960 STORY OF RUTH is less significant as a recapitulation of themes from the Biblcial "Book of Ruth" than it is as another example of the priorities of Hollywood moviemaking. That said, in its status as American pop culture, it sustains more mythicity than the humdrum 2004 JUDAS.

Most Hollywood Bible-films have sustained their box-office profits by building upon one major motif of the Old Testament-- that of the ressentiment of the nobly poor Jews against the rich "princes of the earth," as recorded (for example) in Ezekiel 39:18:

Ye shall eat the flesh of the mighty, and drink the blood of the princes of the earth, of rams, of lambs, and of goats, of bullocks, all of them fatlings of Bashan.


It's surprising, though, that 20th-Century Fox chose to adapt the Book of Ruth at all, because it's totally lacking in any meaningful opposition between the rich and the poor. The Biblical story tells the reader nothing about Ruth's background; she is introduced as a Moabite woman who marries the Hebrew Mahlon, the son of Naomi, during a period when Mahlon's family is sojourning in the land of Moab. Though other parts of the Bible inveigh against Moab and its worship of the pagan god Chemosh (whom later commentators identify with the better-known Moloch), the only original relevance of Ruth's Moabite heritage is that, after the untimely death of Mahlon, Ruth puts aside her cultural birthright and chooses to follow her mother-in-law back to Bethlehem. The story's main significance seems to be to demonstrate that a converted Jew could be as loyal to the faith as anyone born to the religion. Some analysts have asserted that the second part of the story-- in which Ruth meets and marries the Hebrew Boaz-- may reproduce Hebrew fertility rituals in disguised form, largely because Ruth approaches Boaz in a threshing-room, implying an association between the grain and the eventual union between human male and human female.

THE STORY OF RUTH was written by Norman Corwin, sometimes called "the poet laureate of American radio." Corwin only amassed a handful of Hollywood script-credits, but he does bring a sense of intelligence to his rewriting of the Bible-story, possibly because he was an observant Jew. That said, Corwin's script-- directed by journeyman Henry Koster of THE ROBE-- amplifies the role of fertility in the movie's narrative.

To make up for the original story's lack of earthly princes, in childhood the orphan Ruth is given an exalted position as a handmaiden of Chemosh. Some Moabite children end up being sacrifices to Chemosh/Moloch-- implicitly for fertility, though the motive is not emphasized. Ruth dodges that bullet and lives on to serve the god as a young woman (Elena Eden) attached to the priesthood. Only when she meets the Hebrew artisan Mahlon (Tom Tryon) does Ruth come to repudiate the worship of Chemosh in favor of what Mahlon calls "the invisible god," and so she marries Mahlon and becomes the daughter-in-law of Naomi. However, Ruth's renunciation results in the death of Mahlon at the hands of the merciless Moabites. The widowed woman then chooses to accompany her mother-in-law back to Bethlehem. (This development actually weakens Ruth's decision in dramatic terms, since the original story implies that Ruth could have stayed in Moab without any consequences.)

Once they reach Bethlehem, the two dispossessed women have no property, and so they are forced to glean the fields to make their daily bread. The owner of the fields is local bigwig Boaz (Stuart Whitman). He fancies Ruth but one of Naomi's kinsmen has first claim on the widow of Mahlon. In addition, the country suffers a drought, and some of the more ignorant Hebrews attribute the lack of rain to the presence of an idolatrous Moabite in their midst. An ambivalent miracle takes place, when Naomi alone witnesses an unnamed holy man come to town. Not only does rain manifest right after the holy fellow (or maybe angel?) shows up, but he informs Naomi that Ruth is destined to be the ancestress of a great Hebrew king. (This one scene is the movie's only instance of a marvelous phenomenality.)

Even after the rain comes, many hidebound Hebrews still don't want Ruth around, and they put her on trail for idolatry. I suspect that these scenes reflect Corwin's experiences as a writer persecuted by 1950s Commie-hunters, but they also function to give the film a stronger climax than was possible with the original material. The trial causes Naomi's kinsman to renounce her, and even Boaz doesn't seem to want her when two Hebrews testify that Ruth is indeed an idolater. However, Naomi reveals that the two are false witnesses sent from Moab to make trouble for the apostate Ruth-- a far-fetched revelation to say the least. Ruth is then found innocent of idolatry and is united with Boaz. 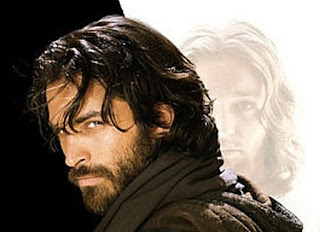 Though RUTH is far from a great Bible-movie, it's a work of genius next to the 2004 telefilm JUDAS. Tom Fontana's script takes the story of Judas' interaction with Jesus and gives the familiar characters banal lines unworthy of anyone's religion. The priest Caiphas is made to say, for example:

I hear that Jesus is quite captivating. I look forward to meeting the young fellow.


The only aspect of JUDAS that's of mythic interest is that Fontana may have drawn upon medieval folklore about Judas, given that the viewer meets Judas's mother, who does not appear in the Bible but does have a role in folklore (oddly, playing "Jocasta" to Judas's "Oedipus). Fontana-- best known for creating the down-to-earth prison-drama OZ-- treats the friendship of Judas and Jesus as if they were just a couple of young guys shlepping around Jerusalem, and shows absolutely no awareness of any metaphysical considerations in the narrative.