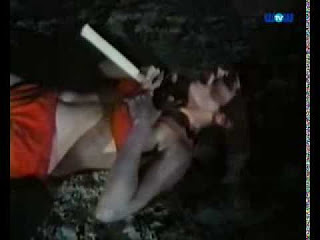 Psychotic killers appeared intermittently in cinema before Alfred Hitchcock scored a major hit with 1960’s PSYCHO. The trope of the psycho-killer became far more prevalent thereafter, as seen in works like 1966’s THE PSYCHOPATH, but most of them were fairly derivative of Hitchcock.

NIGHT OF BLOODY HORROR is the first directorial work by Joy N. Houck Jr,, best known for his cheap “Bigfoot” movie CREATURE FROM BLACK LAKE and for being the son of Joy Sr., a producer associated with an earlier generation of cheap flicks, including Ed Wood’s “Jail Bait.”  NIGHT is sloppily edited and badly acted, but the psychological motivation of its killer is a twist, particularly because the script, co-written by Houck, suggests a motivation of which he might not have been consciously aware.

NIGHT gives the viewer a helter-skelter introduction to Wesley, a young fellow who may or may not be a psycho. In childhood he accidentally shot and killed his brother Jonathan, implicitly the favorite of their mother Agatha. Wes spent some time in a mental institution but was eventually released into general society—but is he really cured? He experiences splitting headaches, illustrated by weird animated visuals. Somehow Wes has no trouble bedding comely young women, but two of his girlfriends get gruesomely murdered. The cops put Wesley through a grilling that borders on brutality, but they can’t prove him guilty. Then another young woman comes into Wesley’s life: a reporter looking for a story on the murders. When she too falls for his (less than obvious)+ charms, the viewer must wonder: will she become another victim?

Since Houck doesn’t provide any red herrings, there should be no surprise in the final revelation: this time, Mommy Really Did Do It. This is the one psychological angle that makes NIGHT more interesting than an outright PSYCHO imitation.

Once Agatha’s crimes are disclosed, she doesn’t use the usual justification seen in the aforementioned PSYCHOPATH: that she nurtured a maternal jealousy of any woman who slept with her boy. Rather, Agatha claims that she’s killed Wes’s girlfriends to keep him from knowing any happiness, because she still resents him for having killed her favorite son. Further, Agatha has in some sense conflated her favorite son with her husband, for it turns out that at some point she acquired the rotting bodies of both Jonathan and her husband, and decided to keep them in her house. (Naturally, whereas Hitchcock played fair with the audience by setting up Norman Bates’ means for preserving his mother’s body, Houck just throws in the two corpses at the last minute, as a cheap shock.)

But for all this distancing, in a roundabout way NIGHT still conforms to the “maternal jealousy” model, since by killing Wes’s girlfriends Agatha is still keeping him from having sex. True, there are no indications that she nurtures any desire for him, but it’s possible that her *eros * has been projected backwards into both Jonathan and the dead father. Aside from this minor trope, the only other noteworthy aspect of the film that its grungy look links it less with the Hitchcock imitators of the period and more with the raw look of the 1980s slashers. 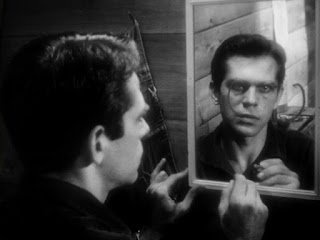 There’s even less going on with 1961’s ANATOMY OF A PSYCHO. Despite using the same buzzword as the Hitchcock movie, the main character is not at all in the Norman Bates tradition of the mad killer. Main character Chet and his sister Pat were raised by their older brother Duke. Duke is found guilty of murdering a man and the state executes him. Pat is able to move on, particularly because she’s engaged to a young upper-crust fellow named Mickey, but Chet just can't let go of the wrongs society did to his family. Chet’s fixation on the injustice of his brother’s execution—whom he regards almost as a surrogate father—is given little psychological elaboration. Only in the opening sequence is his extreme reaction given some basis in fact. After he visits his condemned brother in prison-- where Duke protests his innocence to the last-- some of the “respectable” male teens rag on him for having a crook-brother, beat him down, and scar his face. However, this is the first and last indication that "straight society" might harbor some bad apples. After being so wounded, Chet refuses to let his scar be treated by a doctor, so that it disfigures his good looks and so becomes the "objective correlative" of his rage against society.

The opening suggests a potential conflict between the lower and higher classes in the unnamed American city. However, the script-- which some have attributed partly to Ed Wood writing under a pseudonym-- drops the ball, content to portray Chet and his friends as no-account juvenile delinquents. In his brief crime-spree, Chet starts a fire and burns down a house, treats his girlfriend lousily, and frames his sister’s boyfriend for murder before he's put away by the square citizens. ANATOMY came out at a time when “j.d..films” were beginning to lose their appeal; hence, the attempt to ride Alfred H.’s coattails.


None of the acting is memorable, but one participant makes for some curiosity-value: Ronnie Brooks, adopted son of comedy-team George Burns and Gracie Allen, plays the thoroughly uninteresting character of upper-crust Mickey.
Posted by Gene Phillips at 2:17 PM
Email ThisBlogThis!Share to TwitterShare to FacebookShare to Pinterest
Labels: perilous psychos (n), perilous psychos (u), the naturalistic, the uncanny