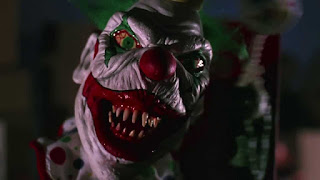 I probably wouldn't have bothered to re-screen the original DEMONIC TOYS if I hadn't become interested in how the franchise had crossed over into the terrains of two more interesting properties: PUPPET MASTER for one, and DOLLMAN for two.

Unsurprisingly, while I did get a little more bang for my buck in re-screening the DOLLMAN crossover, the original TOYS is pretty bang-less. In my moderate praise for the crossover, I noted that Tracy Scoggins gave the best performance as a lady cop. Scoggins gets the best scenes in the original film as well, partly because the toys, in contrast to the manikins from the PUPPET MASTER series, are all very one-note, and they share the same purpose. They've been animated by a demon whose sole purpose is to conduct a sexual ritual with a pregnant woman-- which Scoggins' character happens to be-- and to insert his spirit into a mortal vessel.

The demon's motives aren't convincing, and, aside from the emotional turmoil of Scoggins' character, the toys' other targets-- a young guy who delivers chicken, a female runaway-- are largely dull. The film depends almost entirely upon keeping its victims stuck in a warehouse so that the toys can continually attack them, and the attacks are as unimaginative as the toys themselves. 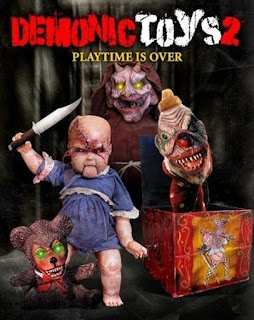 Almost twenty years later, the TOYS franchise gets a second stand-alone outing, one that, in theory, takes place immediately after the first story, ignoring the two crossover tales.

TOYS 2, written and directed by William Butler, doesn't score any major triumphs. However, Butler's direction is more fluid and well composed than most Charles Band-produced films. This time a toy collector with the predictably villainous name "Doctor Lorca" brings the toys to an Italian castle. A young realtor, name of Caitlin, has brought to Lorca's attention the fact that there's a special "moving toy" within the uninhabited castle. As a setup for putting a bunch of potential victims within a restrictive locale, this is no better than fair, but it's certainly a little more fun to see said victims running around a castle rather than a dull warehouse. The potential victims are also at least a little more interesting: cheating wife, weirdo psychic, and so on, and this time the Toys use a lot more CGI to give the illusion of life. But given the limitations of the demon-possessed toy concept, I certainly hope that this is the last trip to the toy box.

Posted by Gene Phillips at 3:53 PM
Email ThisBlogThis!Share to TwitterShare to FacebookShare to Pinterest
Labels: the marvelous