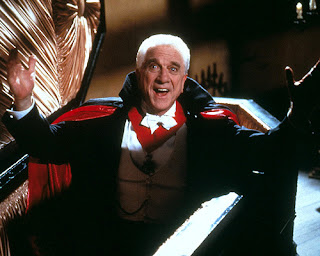 
It remains one of the great mysteries of cinema, that Mel Brooks, working on a script co-written by Gene Wilder, could produce a horror-spoof as good as 1974's YOUNG FRANKENSTEIN, and yet be utterly unable to come up to that level of humor in all subsequent films. It's especially galling to see him fail so badly with DRACULA: DEAD AND LOVING IT, since LOVING generally follows the template of the 1931 DRACULA much as YOUNG FRANKENSTEIN emulated SON OF FRANKENSTEIN.

Possibly not even a good script could overcome the problematic casting of Leslie Nielsen as the vampire lord. I have a mild liking for some of Nielsen's goofball post-AIRPLANE flicks, including bush-league efforts like SPY HARD. But Nielsen's ceaseless mugging seems like a tacit admission that he had no idea how to play Dracula, except as another Frank Drebbin type.

Brooks shares screenplay credit with Rudy deLuca and Steve Haberman, who had previously authored the Italian comedy SCREW LOOSE, for which film Brooks provided only acting services. For what it's worth, LOVING is better than SCREW LOOSE, but only for a sprinkling of grins amid a trash-heap of groans. The three writers reproduce many of the major plotlines of the 1931 film, although they add tropes taken from other vampire films: Nielsen-Drac wears a wig derived from BRAM STOKER'S DRACULA, and in the early scenes Renfield encounters two buxom vampire-brides who look like they came from Hammer Central Casting. (Neither of these were funny, however.)

Renfield, as played by Peter MacNicol, is one of the few joys of LOVING, for MacNichol furiously channels the portrait by Dwight Frye while adding his own manic comic touches. The best scene in the film shows the way the film might have gone: Renfield is trying to prove his sanity to Doctor Seward (Harvey Korman) in order to be released from Seward's sanitarium. Unfortunately, they're on a patio, and there are a lot of juicy bugs around...

One odd change in the 1931 film-template is that this time out. Again Mina is the daughter of Doctor Sweard, but now Lucy is also Seward's ward-- a change that seems to have happened for no reason except to simplify her residence at Seward's sanitarium. Later, when Lucy comes back from the dead, she attempts to poach on the territory of "functional sister" Mina by seducing her fiancee Harker. This might have been an interesting twist if anything had come from it, but the idea is just tossed out there. It also doesn't help that except for MacNicol, everyone else-- Korman, Steven Weber (Harker), and Brooks (Van Helsing)-- give nothing more than journeyman performances.

The conclusion of the film is a little more lively than that of the 1931 film. However, the vampire hunters are all bumblers, so there's no combative mode here.

Posted by Gene Phillips at 3:41 PM
Email ThisBlogThis!Share to TwitterShare to FacebookShare to Pinterest
Labels: the marvelous