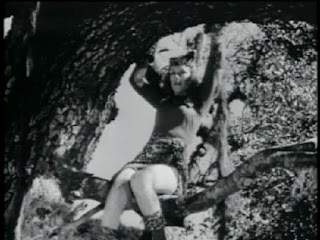 The major "serial queen" films of the silent era came into their own in 1914, roughly two years after the debut of Tarzan in ALL-STORY MAGAZINE. Serial queens were enormously popular for about four or five years, but as it happens, the serial queens started to fade right about the time when Tarzan made his movie debut in 1918. He would go on to star in both features and serials throughout the silent years, while heroines seemed to fade from prominence in the 1920s and the early sound era.

JUNGLE GIRL in 1941 seems to be the first concerted attempt by a major studio-- in this case, Republic Pictures-- to create a heroine who could to some extent fight like a male hero. I can't resist the speculation that Hollywood was at least dimly aware of the market success of the comic-book character Sheena, Queen of the Jungle, who debuted in America shortly after the bombshell success of Superman in 1938. There had been other jungle girls in 1930s cinema, and even in serials like 1935's QUEEN OF THE JUNGLE, but for the most part the ladies were not fighters. Did some studio pitchman decide to cook up a counterfeit Sheena, pretending to base the character on a completely dissimilar figure from an Edgar Rice Burroughs novel? The answer will never be known, but Nyoka of JUNGLE GIRL was popular enough that Republic put out a quasi-sequel the next year: PERILS OF NYOKA, in which the central heroine was even more dynamic than the one from JUNGLE GIRL.

Two years later, Republic dug for jungle-girl gold with THE TIGER WOMAN, which was also the debut for one of the most celebrated serial actresses, Linda Stirling. Whereas both versions of Nyoka were white women raised by white parents, the Tiger Woman was more in the Sheena mold, a "white goddess" who had been raised in a jungle by a savage tribe (albeit one in South America rather than Africa). In addition, the Tiger Woman-- who is never given any other "native" name-- is clearly meant to be just as assertive as the 1942 Nyoka. On occasion she gets knocked out like any other serial heroine, in order to put her in some sort of cliffhanger peril, but unlike other heroines she's seen punching, wrestling, using judo-holds, riding horses and shooting pistols. Further, Linda Stirling has a physical glamour not often seen in the serial queens of the sound era, so that she combined stunning looks with indisputable toughness. It helped that many of Stirling's stunts are performed by a stuntwoman rather than by a man in female costume.

The plot of TIGER WOMAN, though, is not nearly as intricate as PERILS OF NYOKA. As in many jungle-adventure films, a native tribe is the "bone" over which two sets of opponents fight: a group of well-meaning white people and a gang of exploitative whites. In addition, not only is Tiger Woman the high priestess of a tribe whose resources are coveted by the two groups, she's also an heiress. Thus the villainous group is not only interested in making a land-grab from the indigenous tribe, they also want to kill Tiger Woman and substitute an impostor who can claim the inheritance. Both of these villain-plots date back to the silent serials but the overall story doesn't gain anything from blending them.

The villains themselves are also no equal for the two previous Republic heroine-serials, though this time the male lead is strong enough to balance the persona of the jungle-queen. As essayed by cowboy-actor Allan Lane, oil-company troubleshooter Allen Saunders makes a decent embodiment of the "square citizen" who wouldn't dream of doing anything against the interests of the native people. That said, there are times that the cowboy ethos intrudes too much on the jungle-scenario, and there are far too many scenes of good guys simply shooting it out with bad guys. Tiger Woman is indubitably the most visually interesting character, but compared to Nyoka her character is rather underdeveloped, even for an action-oriented serial.

Posted by Gene Phillips at 2:38 PM
Email ThisBlogThis!Share to TwitterShare to FacebookShare to Pinterest
Labels: combative adventures, exotic lands and customs (u), outre outfits (u), the uncanny