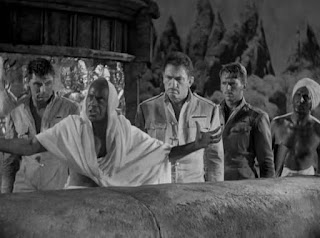 In the many years I've devoted to this blog, I've touched on a number of religious societies that have been either uncanny (THE SEVENTH VICTIM) or naturalistic (COOL IT BABY), but until now I've yet to deal with one of the more unusual religious movements to receive cinematic treatment: the Indian cult of the Thuggee.

Of course, there haven't been very many films devoted to the subject. In recent years the thoroughly marvelous film INDIANA JONES AND THE TEMPLE OF DOOM is probably best known for its lurid portrait of the cult, who were renowned for killing travelers in the name of the bloody goddess Kali. Before TEMPLE, GUNGA DIN was probably the best known depiction of the exotic society.

Not having seen the film in some time, I wondered if how it sorted out phenomenologically. The majority of the film follows the adventures of three knockabout Brit soldiers in colonial India, played by Cary Grant, Douglas Fairbanks Jr., and Victor McLaglen. There are some intense scenes toward the end-- when Grant's character beholds the cult's guru (Eduardo Cianelli), who exhorts his followers to "kill for the love of killing." Though the scenes depicting the weirdness of the Thuggee cult are brief, their length is less important in the phenomenological sense than how they work within the whole film.

On close consideration, I find that director George Stevens plays down the potential grotesquerie of the cult, emphasizing rather the threat that the cult poses to the generally beneficent rule of the English (though the script happily doesn't run the "Rule Brittania" cliches into the ground). After Grant and his buddies capture the Guru and use him as a shield against his men, it becomes clear that most of the Thuggee threat is sociopolitical. Here's the Guru's denying the superior military (and racial) power of his captors:


You seem to think warfare an English invention. Have you never heard of Chandragupta Maurya? He slaughtered all the armies left in India by Alexander the Great. India was a mighty nation then while Englishmen still dwelt in caves and painted themselves blue.


It wouldn't be hard to imagine an film that placed more emphasis on the weirdness of the society, and thus became "uncanny," but these lines suggest to me that the film-makers were concerned with only the world of naturalistic concerns.

As for the film proper, it's a good lightweight adventure, all about three chums defending one another in the service and managing to impress the titular water-carrier so much that he gives his life for the cause of the English. Even for someone like myself, who gets a little tired of political correctness, it's impossible not to see GUNGA DIN as being, at the very least, a fictional "clash of civilizations" in which it's predetermined that the "dark side" must lose. At the same time, scripters Ben Hecht and Charles MacArthur probably had some awareness of the real India's struggle to gain independence from Great Britain, and perhaps that's why the Guru, alone among the faceless cultists, projects a solid personality, as well as a fierce dignity despite the ultimate immorality of his position. Conversely, one may get tired of Grant's heroic-yet-comical character "Archie." He's the epitome of the low-income soldier who harbors dreams of stealing some incredible treasure from the Indian people, so that he can go back to England and become high-class. He never exactly renounces the basic immorality of his treasure-hunting, either. At most he becomes chastened by the noble death of Gunga Din, and perhaps becomes a less profit-driven servant of the Crown.
Posted by Gene Phillips at 3:06 PM
Email ThisBlogThis!Share to TwitterShare to FacebookShare to Pinterest
Labels: the naturalistic, weird families and societies (n)