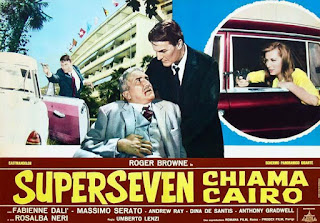 
Here we have two Italian-made Eurospy films, both directed by Umberto Lenzi of "Cannibal Ferox" fame, and both starring American actor Roger Browne as an American spy working for the British as he runs around the exotic locations of Rome, Egypt, etc. His code name is "Superseven" (one guess where Lenzi got that name), but he's usually addressed as "Martin Stevens," which may well be the dullest name ever bestowed upon a superspy. Browne does his best to give Stevens a modicum of Bondian cool, but he's less than riveting in the action-sequences and seduction-scenes. Rosalba Neri, a familiar face from various horror-films, spices up the scenery a bit as the secret agent runs around looking for a "new radioactive material" being smuggled by the Other Side.

As always my main interest in these ephemeral flicks lies in seeing the various ways the writers delve into the phenomena of the uncanny and the marvelous. Certainly the McGuffin in this case is neither. The material involved is somehow radioactive but harmless to the touch, but no one does anything with it, or even explains what it can be used for, so even though it's a "new" element, it sounds like nothing but a plain old isotope, and thus falls within the naturalistic domain. Two uncanny gimmicks do appear. one being a "pen-gun" that Stevens wields a couple of times. Another unexplained gizmo appears about midway through the film. When Stevens is lured to the hideout of the villains, he flees into a cellar, and one bad guy throws a switch. The light inside the cellar turns crimson, and Stevens crumbles into unconsciousness as he sees the nasty spies come in, looking like they've turned into photographic negatives. Later Stevens, recovering after escaping from a torture-session, says something about one of the spies being an electronics expert, which is all the "explanation" one gets for the weird light-show. Still, the general sense of the scene implies that the light-show is low-tech, making it closer to the uncanny than the marvelous. 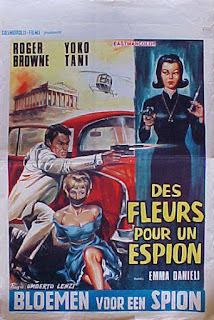 The second and last Superseven film is not really much better, but it has a slightly lighter tone. Stevens tells a shop-girl that he's a superspy named James Bond, knowing that he won't believe her.. and he's saddled with Genevieve, a female agent who seems less than competent, much like the female lead in THE WRECKING CREW.  This time Superseven is given a less than heroic mission: to go forth and assassinate three people who know too much about a super-scientific McGuffin. However, perhaps to keep Steven sympathetic, this plotline is dropped in favor of his chasing around after a villain code-named "the Great Dragon." (Flowers are involved in the spies' recognition of one another, thus explaining the title, but I forget the details.) Sadly, the guy who turns out to be the Dragon is pretty colorless. On the up side, one of the Dragon's agents is a Chinese woman named Mei Lang, who shows much more character than anyone else in the film. (She's played by French-born Japanese actress Yoko Tani). Mei Lang has not just one but two catfights with Genevieve, but while they aren't great fights by any stretch, they are a little unusual in that both spies make generous use of karate chops rather than slaps or punches.

The sci-fi weapon that the two sides are fighting over is never seen in action, but one of Stevens' superiors helpfully explains that the gizmo is capable of short-circuiting the power in a whole city, and that one recent blackout was the result of the gizmo getting a field-test. Even though we don't see the weapon, everyone seems to believe it really exists, so I suppose I must rule that its presence makes the film marvelous in phenomenality. If it weren't for the blackout dingus, though, FLOWERS is disappointingly bereft of spy-gadgets.
Posted by Gene Phillips at 2:47 PM
Email ThisBlogThis!Share to TwitterShare to FacebookShare to Pinterest
Labels: combative adventures, diabolical devices (u), the marvelous, the uncanny