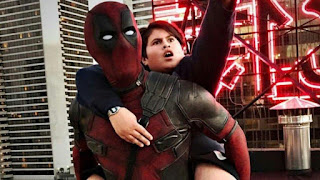 Like the previous entry,  DEADPOOL 2 is so rife with endless jokes at the expense of serious superhero flicks that I'm tempted to label it a comedy.

After all, it's a given that the imperiled characters in a comedy take their lives just as seriously as those in an adventure film, and at some points I've tended to judge works as comedies based on how often they fire off jokes, which are in tune with the *jubilative* mood of comedy. Yet I rate both DEADPOOLS as adventure-films with sizable comedic content, perhaps because the clash of violent forces seems to me even more vital to the franchise than the multitudinous bon mots. In fact, this film's concentration on violent spectacle goes so far that it came close to alienating me from the character's fictional world.

Like most superhero-film fans, I can selectively edit big action sequences (like 2012 AVENGERS) in my mind to avoid the downer that dozens of people surely died in the chaos. But car-crashes are a wee bit more intimate than giant monsters swarming through cityscapes, and I have some problems with the film's moral compass, comedy or not: that it's OK to endanger dozens of innocents, as long as their fates aren't seen, in order to keep one hyperactive victim-of-abuse from turning to the Dark Side and killing all the people he eventually kills.

But back to Deadpool. In the first film, the "merc with a mouth" completed a reasonably happy arc: Guy Fakes His Death to Spare His Girl, But Returns to Rescue Her From a Dire Threat. However, the writers of DP2 evidently felt that they really put the film's half-villainous, half-heroic protagonist through the wringer. Thus Deadpool loses his one true love, and suffers mightily for the first third of the movie before he can be convinced, by Colossus of the X-Men, to channel his pain into public service.

However, the sublimation formula doesn't work so well at the start. Deadpool becomes a "trainee" X-Man, even though he's not technically a mutant, so that means his first case involves reining in a violent mutant at a "mutant rehabilitation" orphanage. The breakneck pace of the film liberates the writers from any responsibility to state the legal and cultural standing of the orphanage. But as soon as Deadpool meets young mutant Russell Collins (a.k.a. "Firefist"). the merc instantly knows that the authorities at the orphanage have abused Russell. Deadpool immediately tosses aside due process and takes bloody vengeance on one of the abusers, but this gets him kicked out of the X-Men and locked away in a special mutant-holding facility alongside Russell and various other Marvel villains (one of whom, Juggernaut, ends up providing some of the gorier violence of the film).

Then the time-traveling avenger Cable shows up at the prison, expressing a sincere desire to end young Russell's life now in order to prevent him from taking many other lives later. As I said, this is a pretty morally bankrupt premise, though it does eventuate in some very cool fight-scenes between Deadpool and his adversary, who is as grimly serious as DP is antic. Deadpool manages to get clear of the prison but Russell remains confined though still alive. Deadpool then dedicates himself to preventing Cable's next attack on Russell. Conveniently enough, the prison authorities decide to move Russell and other prisoners via an armed convoy. This gives Cable a new opportunity for assassination and Deadpool another opportunity to validate his attempt at heroic altruism, while also making certain that the film isn't forced to stage yet another attack on the prison.

In some of the funniest scenes, the loony would-be superhero enlists a bizarre collection of helpers to attack the convoy, some of whom are based on established Marvel characters. As I said, I would have preferred a little less collateral car-damage, though apparently the writers were also okay with wreaking countless injuries, if not deaths, on the nameless prison-guards attached to the convoy. The greater the violence, the more it seems that in the world of DEADPOOL 2, absolutely nothing matters except sparing the victim of abuse from being further corrupted. In fact, even Cable's motive for killing Russell has more to do with his personal interests-- to prevent the deaths of Cable's wife and daughter-- than with protecting any of Russell's other future victims.

The attack on the convoy prevents Russell's death at Cable's hands, but because he's pissed off at Deadpool, the youth allies himself with Juggernaut. The two of them seek out the orphanage, to enact revenge on Russell's principal torturer. Why Juggernaut goes along with this-- who knows? Cable, giving in to Deadpool's infinite abilities to cock things up, makes an alliance with the merc and his surviving aides. DP asks for just one chance to talk Russell out of becoming a homicidal super-villain before Cable kills him, and Cable assents, not believing the merc has a chance in hell. As a viewer, I knew that Deadpool would succeed in his impossible task, though I have extreme doubts about the hero-villain's ability to effect a "talking cure" within mere minutes.

I've frequently defended the superhero genre against hyper-moralistic attacks, so I don't want to make the mistake of judging DEADPOOL 2 by purely moral standards. Morally, DEADPOOL 2 is nonsense, and I'd often say the same of most "do-over" time-travel stories. But DP2 is also problematic in terms of a superhero film's aesthetic power to mount spectacular violence. The technique of the film is flawless in execution, just as it was in the first film. But whereas the first film glories in the hyperviolence for its own sake, Number Two seems more interested in trying to tie all of the wild violence to a Moral Message, which might be stated along the lines of "Protect the Victims of Society, No Matter How Many People You Kill." I also noticed that whereas the first film had some fun dealing with "female-objectification" tropes, Number Two apparently decides that it's more important to play it safe with a half-dozen "homoerotica" tropes. The first film was more even-handed, while this one seems designed to defuse politically correct criticism.

Posted by Gene Phillips at 3:46 PM
Email ThisBlogThis!Share to TwitterShare to FacebookShare to Pinterest
Labels: combative comedies, the marvelous